Container Farming: What is the Future?

Container Farming: What is the Future?

Editor’s Note: Peter Tasgal is an agriculture consultant with former experience as CFO and board member of a $100 million CPG business headquartered in Montreal, Canada. He was also an investment banker for over 10 years. Here he writes about the container farming industry, where startups have been raising venture capital funding, including France’s Agricool, which raised $28 million from an investor syndicate including Danone Ventures, in December 2018, and Square Roots, which raised $5.4 million from a group led by the Collaborative Fund in 2017.

Over the past two decades, technology has allowed for drastic evolutions in many industries, such as the auto and retail industries. At first glance, the agricultural space seems to have lagged behind. Despite a clear desire for locally grown produce, today more than half of the fresh fruit and over one-third of the fresh vegetables that Americans buy is grown outside of the United States.

Desire for local produce, combined with improvements in hydroponic, lighting and other technologies, has attracted participants looking to grow in controlled environments (“Controlled-Environment Agriculture” or “CEA”). Popular forms of CEA include greenhouses – both ground level and rooftop, buildings, and 40 to 53-foot shipping containers re-purposed for growing.

The table below provides a comparison of some prominent forms of farming today: 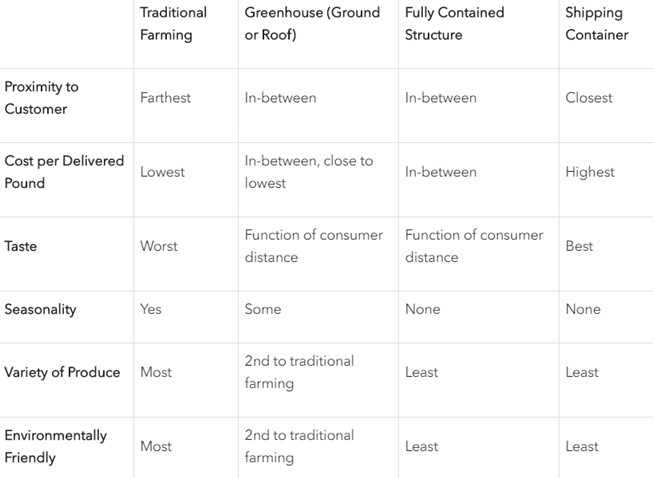 Growing in retrofit shipping containers has received significant buzz over the past five to 10 years as produce is grown hyper-locally on a small footprint. The fully contained structure allows year-round growth regardless of the outside environment. Other benefits include less use of water than traditional farming as well as the lack of need for pesticides given the fully contained structure.

There are significant costs to grow in a shipping container, including the cost of the retrofit container, the cost of labour to grow and harvest, and the cost of power needed to maintain the lighting and optimum internal environment of the container.

Having done significant research on the agriculture space, and specifically leafy greens which are largely what is grown in containers today, it is at best four times as expensive per pound to grow in a container farm and more likely over 10x as expensive as compared to traditional farming methods.

Given the cost multiples, is there technology that could make container farming competitive with traditional farming? Alternatively, does the consumers’ mindset need to change for them to be willing to pay a large premium for local products? Essentially, does the industry need a “Starbucks model” to motivate people to pay a premium price for a premium product when lower cost, albeit lesser quality product is available?

If capital drives innovation, there has been significant funding into the space, including Freight Farms which has raised in excess of $12 million and Square Roots which has raised in excess of $5 million. However, the larger capital raises have occurred in other areas of agtech. For example, three agtech startups founded out of Boston based venture development organization Flagship Pioneering — Indigo Ag, Inari, and CiBO Technologies — have raised $600 million, $40 million, and $30 million respectively. And there are many more examples of better-funded segments of the agtech sector.

There is technological innovation that will improve the efficiency of container farming, but I don’t see anything on the horizon that will allow container-grown produce to compete with the quick turning leafy greens sold at your local grocery store or those sold by wholesale distributors. Alternative venues for container farmers could and have included restaurants, traditional farmers seeking to maintain year-round customers, clean rooms, and areas of extreme climate. Each of these is likely to be a niche area.

If container farming is a niche business, where is all the buzz coming from?

As far as I can tell, the buzz is coming from the supply-side. Supply-side benefits include (i) a need for more farmers in the market; (ii) investors seeking returns in the space; (iii) entry to market with limited capital; (iv) time to market; and (v) limited footprint. It is on the demand side that the growth of the business comes into question. What do you get by growing hyper-local to the end consumer, versus growing within a short distance of the consumer (for example, a greenhouse located within a 24-hour drive)? The answer lies in the marketing of the container farm – e.g. the food you are eating right now at the restaurant was grown right outside and picked minutes ago. It is my belief that the restaurants and other entities that are willing to invest time and money to gain this marketing appeal will be very limited.

Still, there is a great need for controlled-environment agriculture as it allows produce to be grown locally and delivered to the final consumer very shortly post-harvest. Container farming is certainly meeting those demands. However, the confines of the retrofit shipping container make it inherently inefficient compared to other forms of CEA and therefore the audience for container grown produce will be a highly niche one over the long term.

If container farming cannot serve the mass-market then what will?

Consumers have a desire for locally-grown clean produce during all periods of the year which they can buy at a competitive price. The jury is still out, but in my opinion, the answer to this demand is at least in part sizeable CEA facilities located regionally across the United States and around the world. Some that have a great chance of working, whether in their current form or some level of iteration include:

As more and more facilities are put in place, and the range of produce increases, the efficiency of regional farms will improve and companies will continue to evolve to meet customer demand. Companies will determine optimum facility sizes, growth methods, facility types and locations. Technology and capital in agriculture and specifically within CEA will allow us all to be eating locally produced fruits and vegetables all year-round.