Growing lavender for profit can be a great way to turn your love of herbs and gardening into a solid income from selling lavender plants and the value-added products you can make. In many parts of the world, such as the Provence region of France, lavender has been grown commercially for centuries. In North America, commercial cultivation of lavender is just beginning to take off, as lavender’s growing popularity has led many new and veteran herb growers to specialize in this unique fragrant herb. Their lavender farms range from small backyard gardens to multi-acre farms. Today, lavender is experiencing a renewal of popularity as a culinary and medicinal herb, and as a fragrant addition to cosmetics from perfumes to body lotions. If you’re thinking about lavender farming, here are ten common questions and answers about this remarkable herb.

1. Will lavender grow in my area?

Not everyone can grow lavender. You must have the right climate. Lavender is a Mediterranean plant, and requires a similar climate to thrive. The Provence region of France is where most lavender is commercially grown, as the climate, with mild winters and warm, sunny summers, is ideal for lavender production. Lavender needs full sun to do well, but not too much summer heat. A cold winter is also necessary to produce the best flower heads. Lavender grown in regions with high humidity often have problems with fungal diseases, which can sometimes be corrected by wider spacing between plants to improve air circulation.

Lavender has been grown in most areas of the U.S., but some microclimates can really help, such as being near a large body of water. Growers have been successful with lavender production near the Great Lakes and in other parts of the country with colder winters and large lakes. If you’re not sure your area is suitable for growing lavender, check with your local agricultural extension agent or a local garden center. Lavender does well in zones 5 to 9. Also, if you are located in an area with colder winters, such as zone 5, grow Lavendula augustifolia, as it’s the hardiest lavender species.

2. What is the best lavender species to grow?

That depends on what you plan to do with your lavender harvest. Although there are over 30 species of lavender, with hundreds of varieties, there are just 3 species that are widely grown by most commercial growers. The first is Lavendula augustifolia, also commonly called ‘English’ lavender. The second is Lavendula x intermedia, called lavandins, as they are hybrids, also known as ‘Spike’ lavender. The third common commercial species is Lavendula stoechas, known also as topped lavender or Spanish lavender.

3. How much money can a lavender business make?

Some small growers tend a few dozen plants in their backyard, and are happy to make a few hundred dollars. Larger operations on acreage can bring in hundreds of thousands, especially if they also produce and sell value-added products. Purple Haze Farms, in Sequim, Washington, for example, routinely grosses over a million dollars a year with about 8 acres of lavender. Fresh lavender bouquets are a very profitable way to sell lavender. Most growers sell direct to the retail public, either from their garden or at the local farmer’s market. At our local Saturday market, lavender bunches sell for $6 each. A 20′ x 20′ growing area can produce around 300 bunches each year, worth $1,800. Larger plots are even more profitable. A quarter-acre can produce about 3,000 bunches, worth $18,000. Unsold lavender bunches can be dried and sold to crafters and florists, who use the bunches for dried floral arrangements. Also, the flower buds can be removed from the bunches and sold or used to make sachets and other value-added products. Other lavender products, such as lotions and soaps, bring 500% or more markups from the price of the basic ingredients.

4. How is lavender propagated?

To insure lavender plants are consistent in quality, color, and oil production, almost all commercial growers propagate lavender from cuttings rather than from seed. Producing lavender from cuttings guarantees the new plants will be exact clones of the parent plants. New growers can purchase their plants from wholesale growers, then take cuttings from these “mother” plants.

5. What kind of soil does lavender need?

Lavender must have well-drained soil, with a pH of 6 to 8. You can test your soil with a simple pH tester found at most garden centers. If your soil tests alkaline, you can add sulfur to lower the pH. If it is too acidic, add lime to raise the pH. In addition to the proper pH, lavender does best in sandy loam soil that provides good drainage. If the soil becomes saturated with water, as often happens in clay soils, areas with hardpan or a high water table, the result is root rot disease that will kill the lavender plants. Many lavender growers use raised growing beds to improve water drainage.

6. When should lavender be harvested?

Lavender should be harvested as dry as possible to avoid problems with mold, so never harvest immediately after a rain or if there is heavy dew. Hot weather can also be a challenge, as the heat can cause oil loss. Most growers agree that late morning, after the dew has evaporated, and early afternoon are the best time to harvest. If you’re selling bouquets, fresh or dried, harvest when the first flower blooms open up on the stems.

7. How is lavender dried?

After harvesting the lavender bunches, bind them with a sturdy rubber band around the base of the stems. Take the bunches to a drying area as soon as possible to prevent the color from fading. The drying area should be dark, dry, and have good ventilation. The bunches are hung upside-down until dry.

8. Where can I sell lavender?

For most small lavender growers, the Saturday market is the best place to sell your harvest, from fresh cut lavender bouquets to dried buds, lavender oil and the many value-added lavender products you can make and sell. Best of all, selling direct at the market allows you to cut out the middleman and receive full retail prices for your products. By taking a few simple additional steps, growers can take their lavender harvest from a basic herbal commodity to valuable items that bring top dollar from consumers, such as lavender soap, lavender spritzers and lavender sachets.

9. What value-added products can be made from lavender?

There are dozens of lavender products that are easy to make and increase the value of raw lavender by up to 1,000%, such as personal care products made with the lavender flower buds or the essential oil extracted from the flowers. Three proven value-added products that enjoy widespread appeal, substantial profit margins and repeat buyers are:

Lavender oil has been used for hundreds of years as an antiseptic, a natural antibiotic, an insect repellant and a calming sedative. It is used as the aromatic base for thousands of cosmetic products, such as lotions, massage oils, perfumes and soaps. When lavender oil is extracted from the plant using distillation, the process produces both the essential oil and a lavender hydrosol. The lavender hydrosol has a tiny amount of lavender oil as well as the water-soluble parts of the lavender plant, and it is often used to make spritzers and room fresheners. Several manufacturers make small, affordable tabletop distillers used to extract the lavender oil from flowers.

All You Need to Know About Growing Lavender 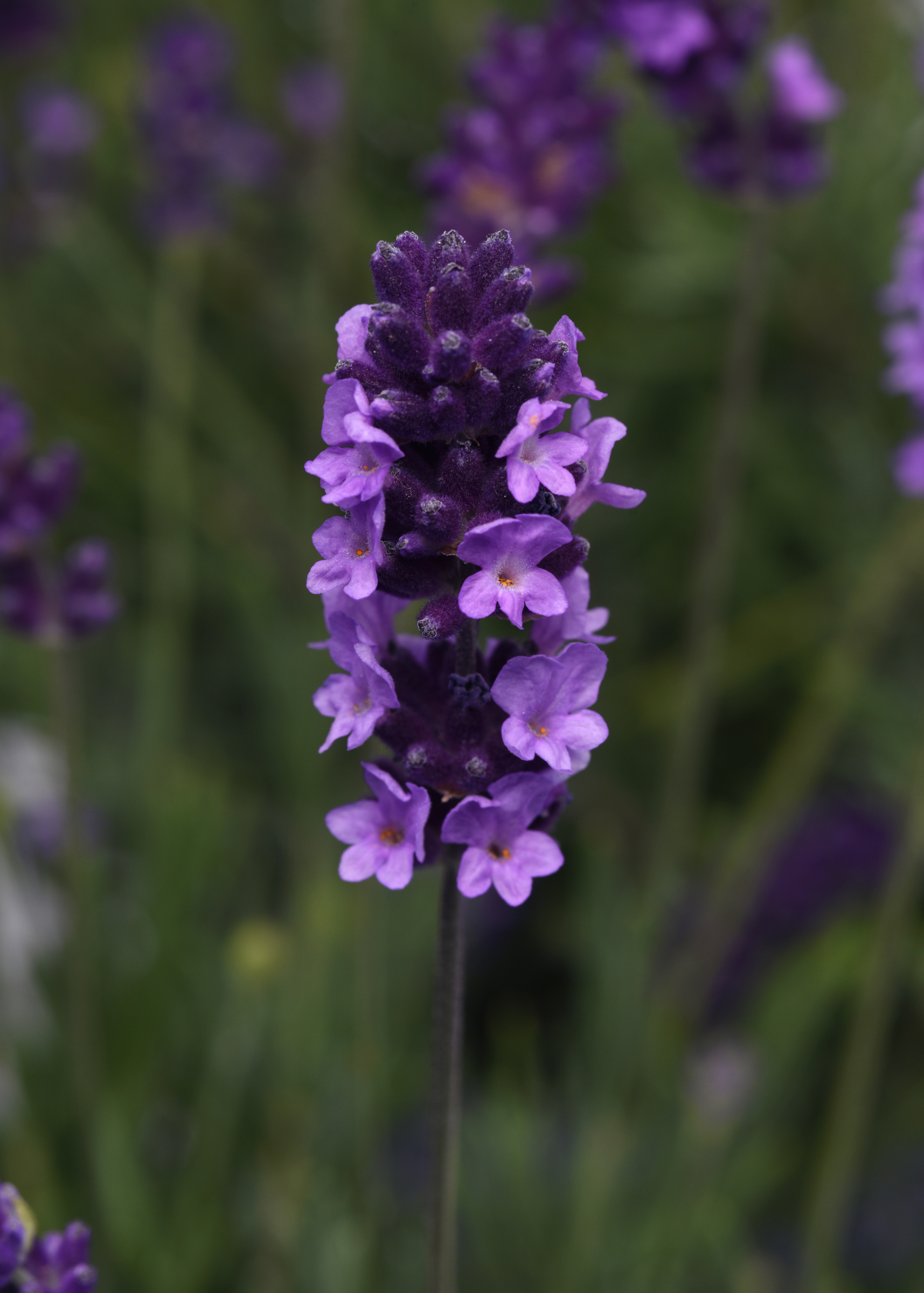 Lavender is one of our loveliest garden plants, and because it is so successful in landscapes, one forgets that it is primarily a herb, and an extraordinarily useful one at that. It has a long list of attributes. Besides its fragrance and beauty, it is an ancient medicinal plant, an effective pest repellent, a valuable companion plant, a culinary flavouring and garnish and household freshener and cleaning agent. This article will take you through the planting, watering, feeding and pruning stages of lavender as well as the uses of lavender. 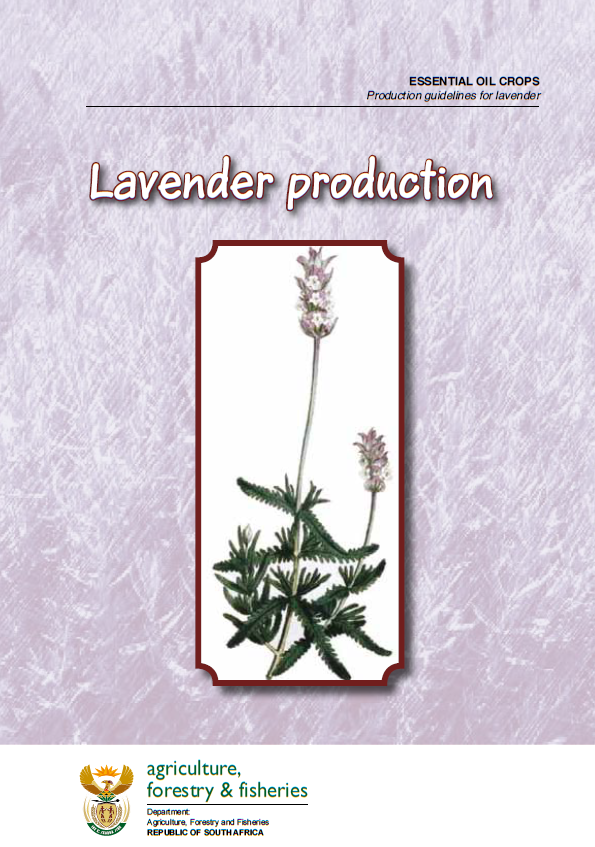 The Lavender Production Guidelines is a document is an official document by the Department of Agriculture, Forestry & Fisheries that takes you through the general aspects of lavender, the cultivation practices, the post-harvesting handling, the production schedules and the utilisation of lavender. 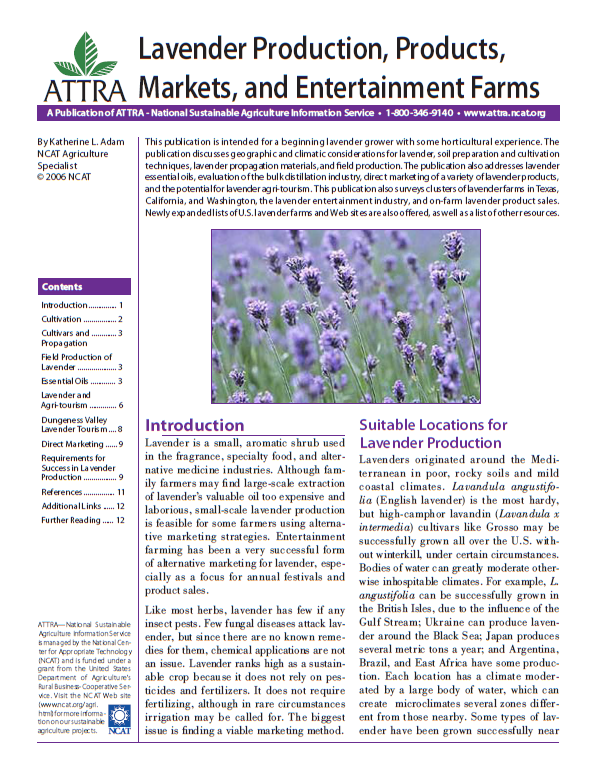 This publication is intended for a beginning lavender grower with some horticultural experience. The publication discusses geographic and climatic considerations for lavender, soil preparation and cultivation techniques, lavender propagation materials, and field production. The publication also addresses lavender essential oils, evaluation of the bulk distillation industry, direct marketing of a variety of lavender products, and the potential for lavender agri-tourism. This publication also surveys clusters of lavender farms in Texas, California, and Washington, the lavender entertainment industry, and on-farm lavender product sales. Newly expanded lists of U.S. lavender farms and Web sites are also offered, as well as a list of other resources.