While thousands of matriculants celebrate their final results, Malesela Molema remembers the anxiety when his marks were once too low for varsity acceptance. Today, his poultry side-hustle is booming – and he’s not just famous on TikTok 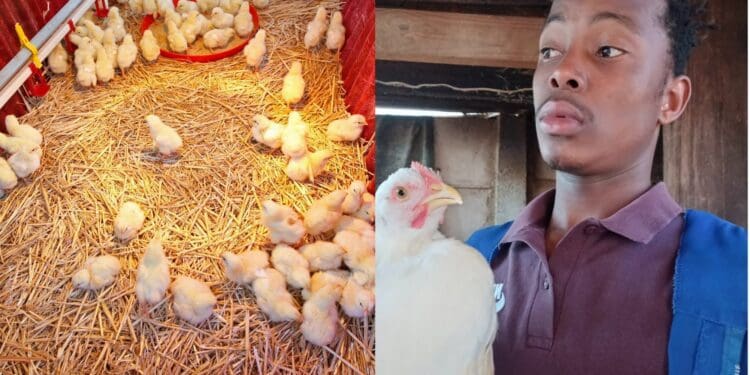 Malesela Molema is not only a rising TikTok star, but also a beginner chicken farmer with great potential. He farms in Nobody Thakgalang, a village in Polokwane, Limpopo. Photo: Supplied/Food For Mzansi

It is often said that matric results are the pathway to higher education and a brighter future. But what happens if your marks were not that great and you’re facing rejection by universities? Meet Malesela Molema (22), the proud owner of an agribusiness in Nobody Thakgalang, a village in Polokwane, Limpopo, who beat the odds.

Molema achieved a higher certificate pass in 2018. This was not good enough to get him accepted by universities, leading to great anxiety. “It was either I had to go rewrite [or accept my grade 12 results]. I didn’t understand what the teachers were saying the year before, so what was going to change this time [around]?”

It was his 64-year-old father, Charles, who advised him to become a farmer. This wasn’t a strange suggestion because farming has been in the Molema blood for many generations. So, he took his father’s advice to heart…

Despite the fact that his father didn’t go to school, he was Molema’s hero because he always preached the importance of education. This led to Molema enrolling at the Buhle Farmers’ Academy, an organisation that trains, mentors and supports new farmers.

Molema might not have gotten into varsity, but he found a home and future in agriculture. Since he was the youngest of four children, he was given the job of taking care of the free-range chickens his dad bought in 2015.

He had no idea that he was actually being prepared for greater things to come.

He tells Food For Mzansi, “It amused me how these chickens could survive almost everything. If I was going into farming, it had to be poultry farming.”

Falling in love with farming

After completing three months of practical training at the academy, he took a free business management course at a local community hall. It was during this period that he was hired as a general worker for Roots Butchery, a retailer and meat wholesaler for which he still works.

“I have always wanted to do something bigger in my career, and after the completion of the course, I was so in love with farming,” he recalls. He used his first salary to start Molema Poultry Enterprise, his very own business. “Anyone can be in the poultry business – even a student getting an NSFAS allowance.”

Molema started out with 100 day-old chicks of which 23 died. Infrastructure wasn’t a problem. He simply used the same space that his family used for their free-range chickens. Later, he also received funding from the Limpopo department of agriculture and rural development.

“This made things much easier as I was able to grow and sell more [chickens] in my community,” he says.

Be careful who you take advice from

Inspired by the power of social media, Molema took to TikTok to share his journey as a poultry farmer. Soon, his content started trending, leading to many new customers, while other aspiring farmers shared chicken farming tips.

Like everything in life, Molema learned to be careful about whose advice he follows. “Some [young farmers] advised me to use brown sugar to give chickens energy to eat. To be honest, this didn’t work for me.”

There were many other bloopers, including never switching off the lights to regulate the chickens’ temperature. “The major one that did work was giving the chickens aloe vera for strength. I am still using it and it works for me.”

During Eskom power failures he also got a good tip of making a fire with wood in close proximity to his chickens. “I am also using this process during load shedding for them to have lighting and to maintain the temperature because I do not have solar or any other backups.”

Despite his many successes, Molema is most proud of the fact that he can take better care of his family with the money he makes from his side hustle. The experience at Buhle was also an eye-opener, he says. “Imagine, people eat three times a day. Multiply those plates with the number of people in each community or our country. That is a lot of money, so there is money in farming.”

Molema has hired two employees to help run his own business while he still works at Roots. In addition to growing the business, he plans to equip others with the skills to start their own agribusiness. “[One day], I will have my [own] school where kids with special needs learn life skills and how to make a living with agriculture.”