The Tanzania Agricultural Research Institute (TARI) said on Sunday plans were afoot to introduce 13 new grape varieties from South Africa to boost production of wine in the country.

He said the varieties to be introduced from South Africa were a mixture of red and white grafted scions as well as rootstocks.

Massawe said the introduction of the hybrid varieties will go in tandem with many interventions to increase the cultivation of grapes within the country, a move anticipated to stimulate winemaking industries across the country.

For years, grapes were known to thrive in Dodoma region only but recent research had established that it can grow well in Morogoro, Kilimanjaro, Tanga, Arusha, Tabora, Mwanza and Ruvuma regions, he said.

Available statistics by the Ministry of Agriculture indicate that there are at least 1,696 grape farmers in Dodoma region with an annual production volume of 10 052 tonnes.

Tanzania, despite not having an international reputation as a wine producer, is actually home to the second-largest wine-producing region in Sub-Saharan Africa (after South Africa). The history of wine production in the country is relatively recent and roughly grew in tandem with the independence of Tanganyika and its merger with Zanzibar in the 1960s.

Vines were first introduced to the country by members of the Roman Catholic Congregation of the Holy Ghost (commonly known as the Holy Ghost Fathers) in 1938. They were planted near the Kondoa District in the Dodoma region, which has now become the centre of Tanzanian wine production as well as home to the country’s capital. Tanzania’s climate is semi-arid with low humidity and many of the soils in the Dodoma region are sandy and well-draining. The number of sun vines sees actually allow for two full growing seasons with harvests taking place in March and August. 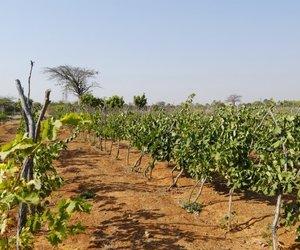 Wine production remained mostly secluded to missions until the newly independent government invested for the first time in grape growing. A 2-hectare (5-acre) vineyard was planted in Dodoma’s Isanga Prison in the 1960s. A winery was built in 1969 and the government began incentivizing farmers to plant grapes. In 1979, the government established the Dodoma Wine Company (Dowico) to solidify commercial production of locally grown and vinified wines. Dowico established a research facility and began experimenting with different grape varieties.

Three main wine companies have heavily influenced the growth of the local wine industry; Dowico, Tanzania Distilleries (TDL) and the Central Tanzania Wine Company (Cetawico). Together these three producers make the country’s most significant brands including Dodoma, Imagi, Overmeer, Presidential, Altar Wine and Sharye. The wines are produced in roughly broad styles and are often blends that don’t describe the grape varieties used. As an example, one of the largest local brands makes only a few styles of wines labelled simply as dry red or white, ‘naturally sweet’, and rosé. Popular varieties that go into these blends include Chenin Blanc, Syrah, Cabernet Sauvignon and a local variety named for a Dodoma sub-region, Makutupora.

Wine has grown in popularity and success in the new millennium in particular. Between 1998 and 2015 the export of Tanzania’s grape wine increased from 176kg to over 150,000kg, mostly travelling to neighbouring east African countries. This is significant as Tanzania’s agriculture drives more than a quarter of the country’s GDP of which 85 percent is from its exports. The growth of wine as an industry in the country is partly due to South African investors in the late 1990s bought significant shares in Tanzania Distilleries. South African wines also make up a significant proportion of the market share of wines available locally in Tanzania.

Besides grape wine, Tanzania makes a variety of fruit wines from mango, bananas and plums. Grapes are also used in the production of brandy, of which more than half a million litres was made in 2011.