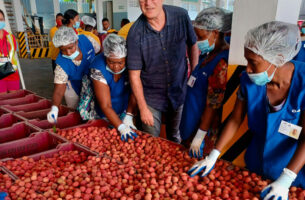 Opening of the 2021 Madagascan Lychee Campaign The 2021 Madagascan lychee campaign officially began on November 17 with the start of the first harvests. Announced under the same auspices as 2020, the campaign promises to be qualitative with beautifully crafted fruit and expected volumes. The lychees have indeed benefited from good climatic conditions – rainfall and adapted […]