Jackfruit Goes Global: How This Superfood is Becoming the World’s Preferred Meat Alternative

A large, spiky, green coloured fruit called ‘jackfruit’ has been making appearances at markets and restaurant menus around the world. In 2017, Pinterest even declared it to be the top food trend of the year. Its fans in non-native countries often get to see jackfruit in the form of neat cubes packed in cans. Let’s take a look at what the jackfruit looks like before it is packed and exported. Jackfruit (Artocarpus heterophyllus) is the fruit of a tree native to the western coast of India.1 While it has recently gained popularity in the West, European natural historians have known about it for over 300 years. Historical records indicate that it gets its name from the word ‘chakka’, which is the fruit’s name in the Indian language Malayalam.2

The jackfruit tree is a member of the Moraceae family, making it a cousin of the fig and mulberry plants. Jackfruit the largest tree-borne fruit in the world, with each fruit weighing between 10 and 25 kgs.3 Jackfruit trees are known to bear up to 150 fruits per year.4

Which Jackfruit Parts are Edible? 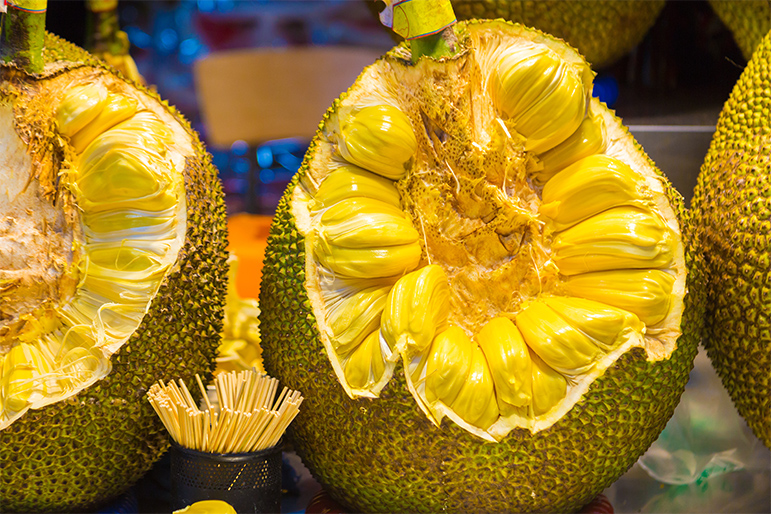 Big cut up jackfruit showing inside part, at local market in China

The fruit itself consists of 3 parts – the central core, fleshy bulbs, and the outer skin. Of this, the bulb and the seed within the bulb are edible.

Where Does Jackfruit Come From?

Jackfruit grows in tropical and subtropical parts of the world such as India, Malaysia, Central and Eastern Africa, the Caribbean, Florida, Brazil, Australia, Puerto Rico and many Pacific Islands.5 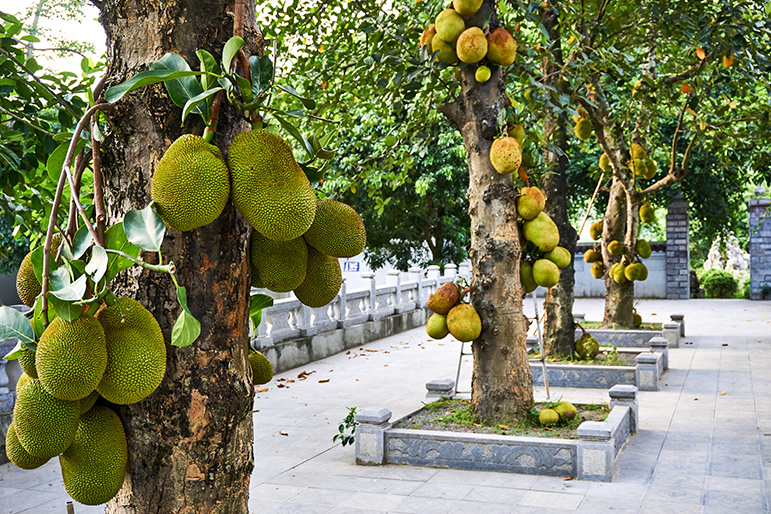 Jackfruit on the tree in Tam Coc, Vietnam

Unlike other fruit-bearing trees, jackfruit trees are often not grown in orchards. In native countries, they are roadside flora, meant to provide shade or break wind.4 They also grow in forests and are sometimes planted in woodlots.4 Jackfruits trees require very few resources to flourish, making them an important source of nutrition, timber, and animal fodder in local food systems.4

How Jackfruit is Harvested 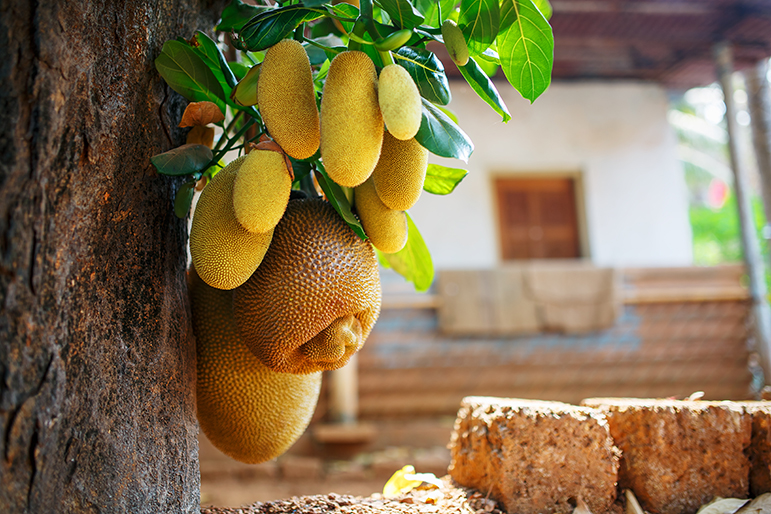 Jackfruits can be harvested and consumed when they are unripe (often referred to as a vegetable at this stage) or when they have matured. The unripe jackfruit needs to be cooked before consuming and is popular for its meat-like texture; frequently compared to that of pulled pork or chicken breast. Ripe jackfruit’s bulbs are sweet and yellow or orange in colour. They can be eaten fresh or made into desserts such as ice creams or puddings. A ripe jackfruit’s taste is often described as a cross between a banana and a pineapple (as tropical as it gets!).

Processing jackfruit to separate out the edible parts is tedious because of its large size and hardy skin. Like all other parts of its tree, the jackfruit contains high amounts of latex (glue like substance produced by plants), making handling and cutting a slight challenge for the untrained. The latex can also cause an allergic reaction in some people.6

Fun fact: In Brazil, the jackfruit tree is considered to be an invasive species. It was introduced in the region in the late 17th century and now outcompetes local trees.7

by The Economic Times India 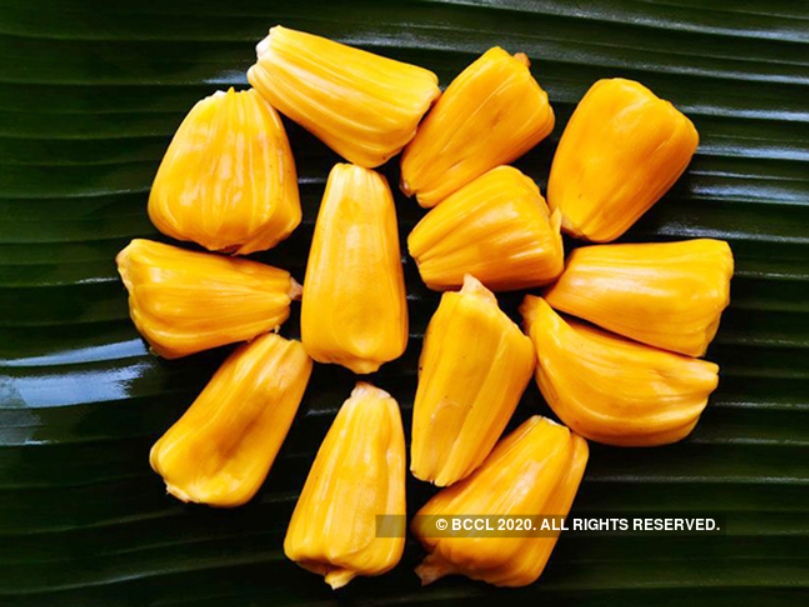 Jackfruit has a waxy yellow flesh when ripe, and is eaten fresh, or used to make cakes, juices, ice creams and crisps

THRISSUR: Green, spiky and with a strong, sweet smell, the bulky jackfruit has morphed from a backyard nuisance in India’s south coast into the meat-substitute darling of vegans and vegetarians in the West.

Part of the South Asia’s diet for centuries, jackfruit was so abundant that tonnes of it went to waste every year.

But now India, the world’s biggest producer of jackfruit, is capitalising on its growing popularity as a “superfood” meat alternative – touted by chefs from San Francisco to London and Delhi for its pork-like texture when unripe.

“There are a lot of enquiries from abroad… At the international level, the interest in jackfruit has grown manifold,” Varghese Tharakkan tells AFP from his orchard in Kerala’s Thrissur district.

The fruit, which weighs five kilogrammes (11 pounds) on average, has a waxy yellow flesh when ripe and is eaten fresh, or used to make cakes, juices, ice creams and crisps.

When unripe, it is added to curries or fried, minced and sauted. In the West, shredded jackfruit has become a popular alternative to pulled pork and is even used as a pizza topping.

“People love it,” Anu Bhambri, who owns a chain of restaurants in the US and India, explains.

“The jackfruit tacos have been a hit at each and every location. The jackfruit cutlet — every table orders it, it’s one of my favourites!”

James Joseph quit his job as a director at Microsoft after spotting Western interest in jackfruit “gaining momentum as a vegan alternative to meat“. 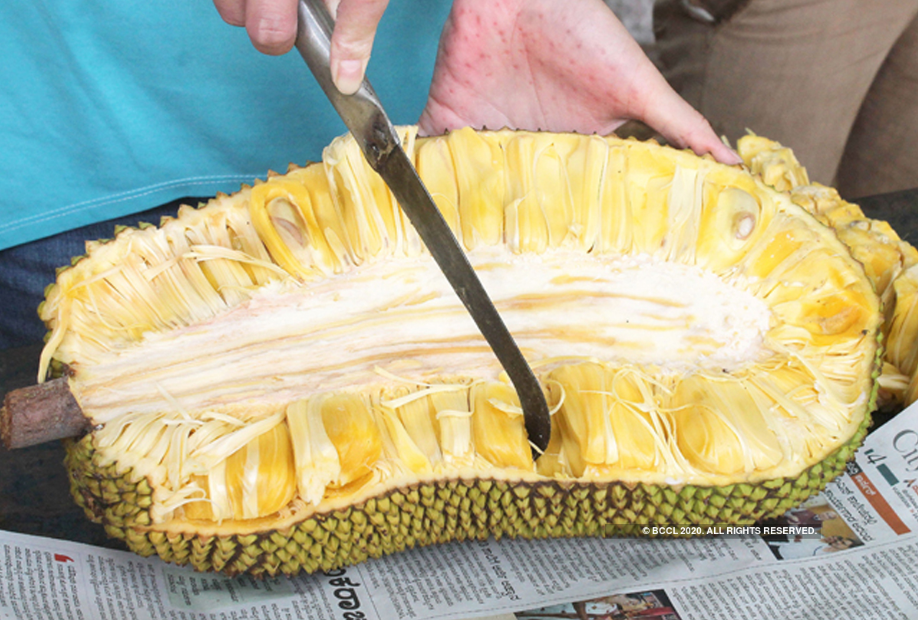 Each tree can yield as 150-250 jackfruits a season

Jack of all fruits

“Coronavirus caused a fear for chicken and people switched to tender jackfruit. In Kerala, lockdown caused a surge in demand for mature green jackfruit and seeds due to shortage of vegetables due to border restrictions,” he explains.

Global interest in veganism was already soaring pre-pandemic, buoyed by movements such as Meat Free Mondays and Veganuary, and with it the business of “alternative meats.”

Concerns about health and the environment – a 2019 UN report suggested adopting more of a plant-based diet could help mitigate climate change – mean consumers are turning to brands such as Impossible and Beyond Meat for plant-based replications of chicken, beef, and pork.

But they are also using substitutes long popular in Asia such as soy-based tofu and tempeh, and wheat derivative seitan, as well as jackfruit.

This boom has meant more and more jackfruit orchards have sprung up in the coastal state.

You get a hard bite like meat — that’s what is gaining popularity and like meat it absorbs the spices,James Joseph, ex Microsoft Director

His firm sells jackfruit flour which can be mixed with or used as an alternative to wheat and rice flour to make anything from burger patties to local classics such as idli.

“When we did a nutritional analysis, we found jackfruit as a meal is better than rice and roti (bread) for an average person who wants to control his blood sugar,” he adds.

India has one of the highest diabetes rates in the world and is expected to hit around 100 million cases by 2030, according to a study by The Lancet. 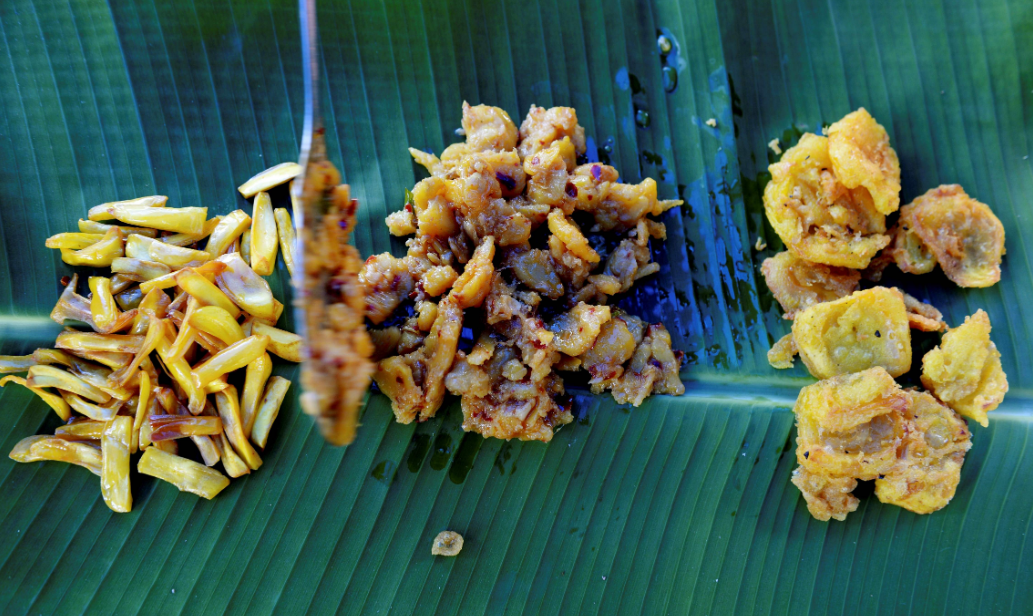 When unripe, jackfruit is added to curries or fried, minced and sauted

As global warming wreaks havoc on agriculture, food researchers say jackfruit could emerge as a nutritious staple crop as it is drought-resistant and requires little maintenance.

Tharakkan has not looked back since he switched from growing rubber to jackfruit on his land, and has a variety that he can cultivate year-round.

“When I cut down my rubber trees everyone thought I had gone crazy. But the same people now come and ask me the secret of my success,” he smiles.

In Tamil Nadu and Kerala alone, demand for jackfruit is now 100 metric tonnes every day during the peak season yielding a turnover of $19.8 million a year, says economics professor S. Rajendran of the Gandhigram Rural Institute.

But there is rising competition from countries such as Bangladesh and Thailand.

Jackfruit’s newfound international fame is a massive turnaround for a plant that while used in local dishes, has long been viewed as a poor man’s fruit.

In Kerala, where it is believed to have originated, deriving its name from local word “chakka”, Tharakkan recalls it was not unusual to see notices in private gardens asking people to take away the fruit for free because they were so plentiful, they would simply rot and attract flies.

And while India’s jackfruit growers – like the wider agriculture sector – have been hit as the nationwide coronavirus lockdown causes a shortage of labour and transport, international demand shows no sign of slowing.

He adds: “It’s not only vegetarians or vegans, even the meat-eaters, they just love it.” 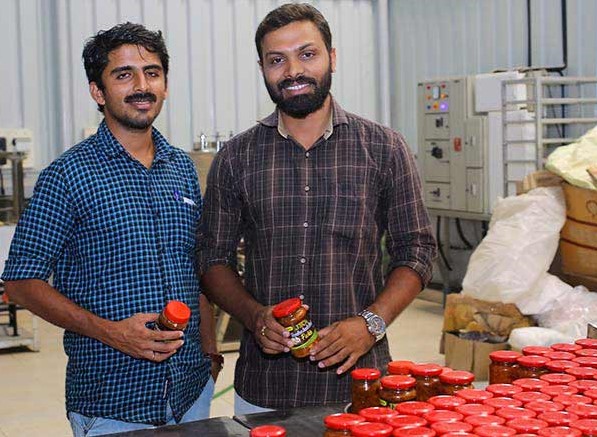 A software programmer-turned-entrepreneur decided to do something about it. K M Sooraj started Nutritivo Food Products in Wayanad district to tap into the unending supply of nature’s bounty. The firm that works out of the Kinfra Park at Choondal is in the business of making pickles, powder, laddu, halwa, chips and even honey out of jackfruits. The top-selling items are jackfruit pulp, jackfruit powder and jackfruit seed powder. 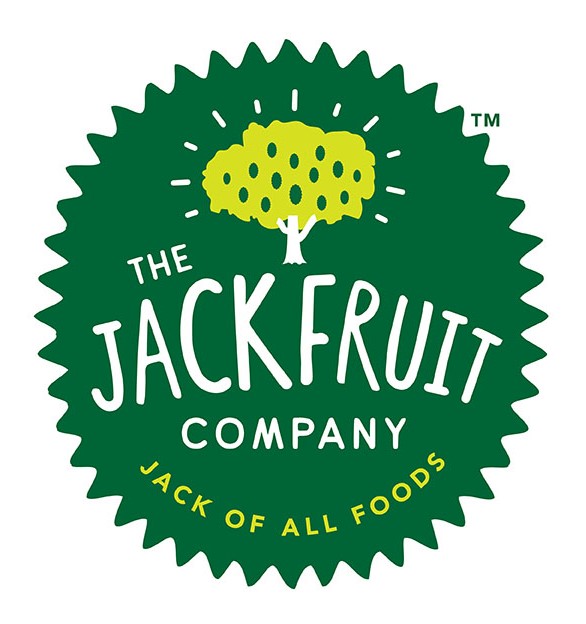 There are so many big things to love about jackfruit, we almost don’t know where to start. How about with the fact that the amazing tree not only produces the largest tree-borne fruit in the world, it also produces tons of them? Literally. Because one jackfruit tree can produce up to 200 jackfruit a year, and each jackfruit can weigh up to 100 pounds.

A Complete Guide to Jackfruit 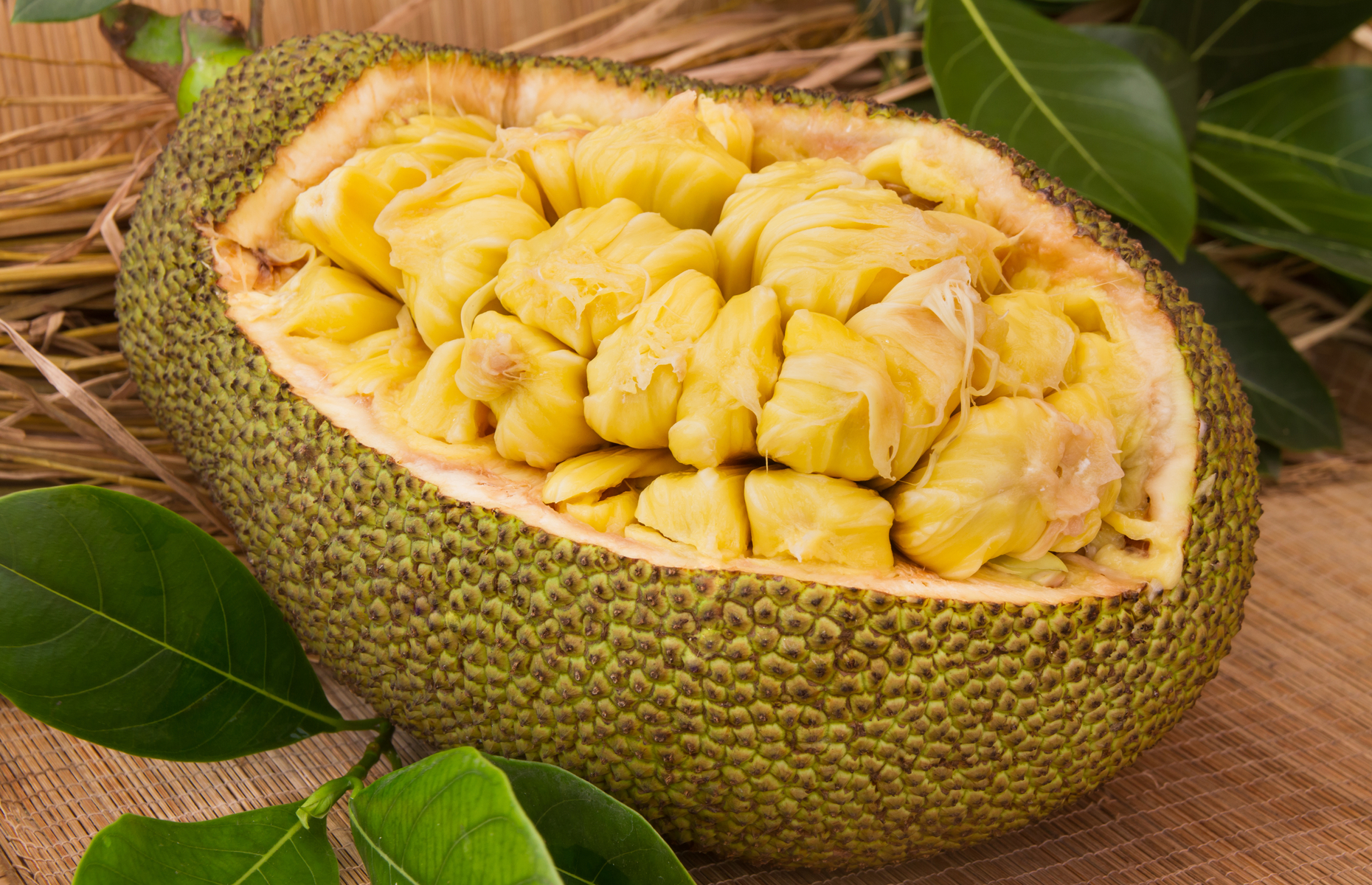 A big hulking fruit, jackfruit (Artocarpus heterophyllus) has rough, thick, spiky skin more like an animal’s than something from the plant kingdom. It’s from the fig and mulberry family, and colours range from yellow-green to bright green and pale brown. Often too heavy to carry, it can weigh as much as 55kg (120lbs) and is oval, oblong or round in shape. It’s in season in July and August. 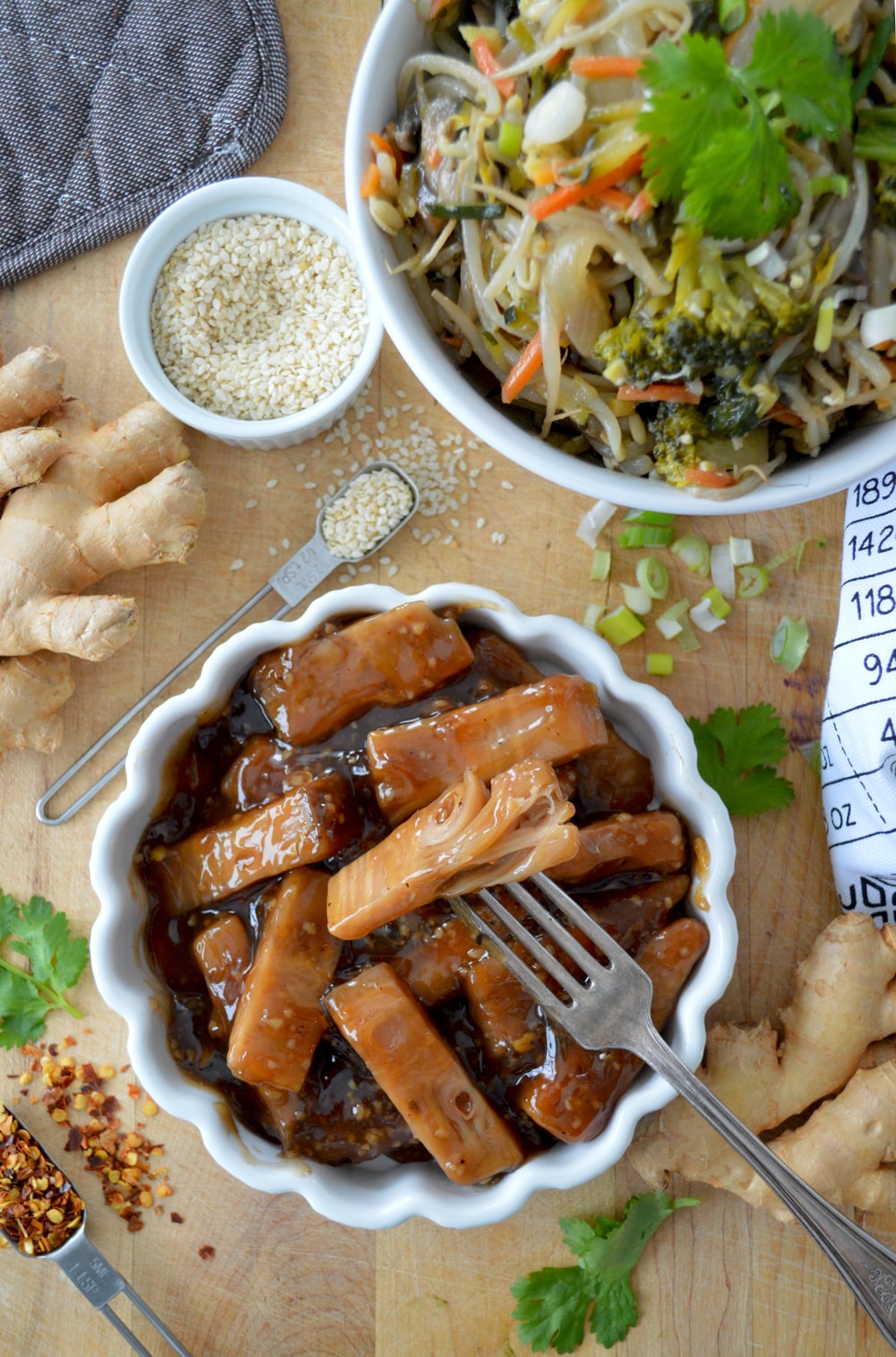 Jackfruit offers a tasty and nutritious alternative ingredient to pork products as it can be cooked and shredded like the real thing. Startups will enjoy its versatility, replicating the exact taste and texture of pork which is key to developing plant-based proteins consumers will invest in. Although the plant is native to India as well as Southeast Asia and South America, as its popularity grows and plant based demand sweeps the globe, could we be seeing jackfruit-based meat products on European supermarket shelves in the near future?

What is Jackfruit and Why is it Pulling Ranks Over Pork? 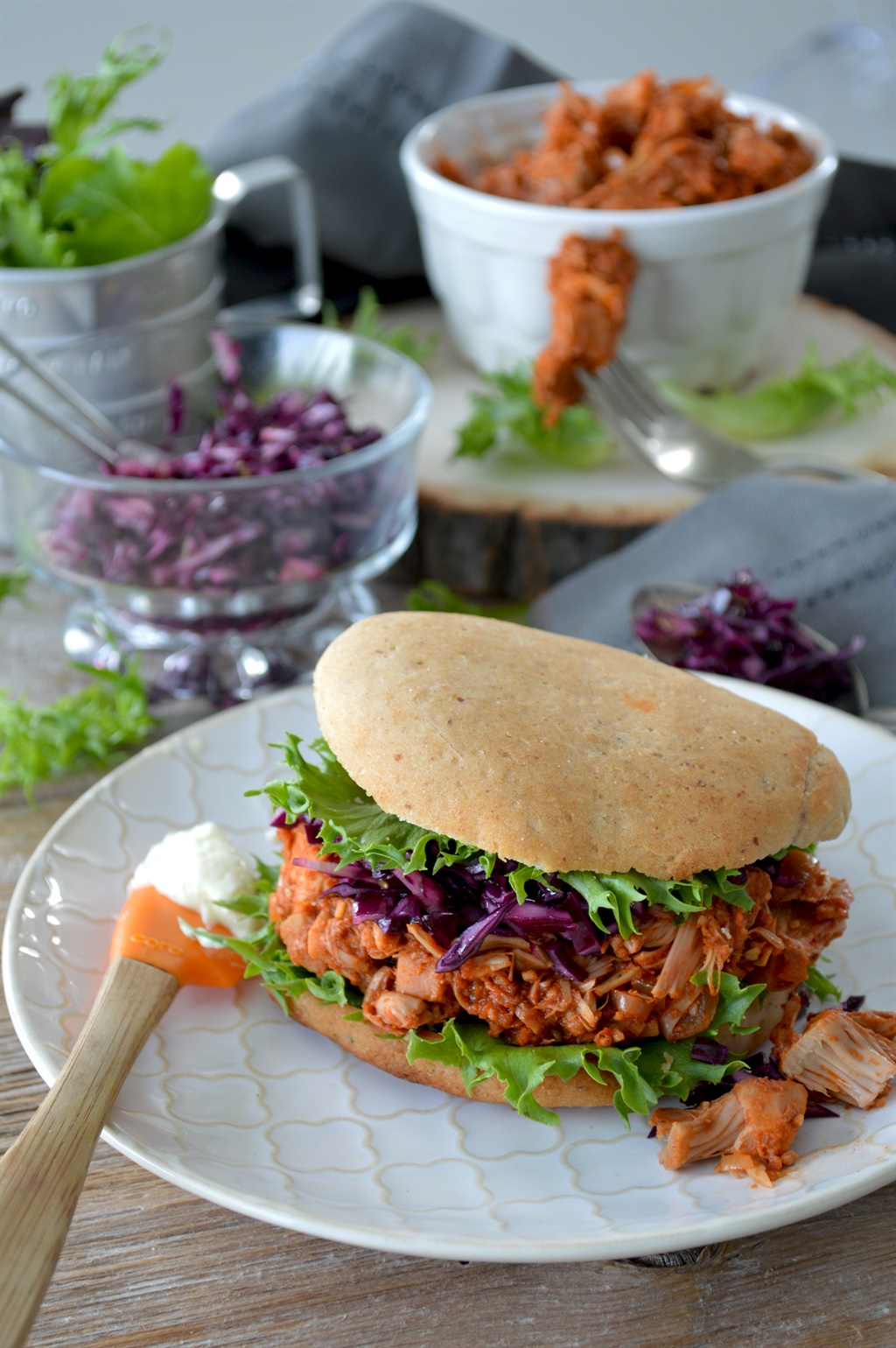 Heard about jackfruit? It’s the food industry’s latest love child in the plant-protein arena, and it’s making bacon-sized waves. If there’s one meat that carnivores harbour nightmares about giving up above any other, it’s bacon. Just thinking about the scent of rashers crisping up in a frying pan is enough to set mouths watering. But whether we like it or not, the world is shifting attention to greater awareness around animal agriculture, animal cruelty, and environmental impact. Enter the elusive jackfruit.