This article is the Part 2 compilation of how Hydraform played a role in impacting African communities in Chad and Uganda.

Having commenced the construction phase in 2010, a total of 20 buildings for the Ongutoi Health Centre in Uganda, built on behalf of the conflict-ridden community by a Canadian charity, High Adventure Gospel Communication Ministers, has been completed. Of note is that all the buildings at the facility were built using Hydraform’s innovative and cost-effective alternative building solutions.

African countries such as Uganda are among the most ethnically diverse globally, and they are also vulnerable to climate change. Available research suggests that peace is always harder to achieve and maintain in places like Uganda where ethnic diversity, as well as natural factors such as droughts, heatwaves, floods and other extreme weather-related catastrophes can precipitate dangerous economic shocks, often triggering conflict.

Whenever ethnical wars are mentioned, the Lord’s Resistance Army, better known as the LRA rebellion, comes to the minds of many, having haunted northern Uganda for many years. Having terrorised northern Uganda for two decades, by 2006 the LRA indicated an interest in peace negotiations, but in areas like Ongutoi, people had been 100% displaced. While lack of shelter became a humanitarian crisis, health care was even a major concern for the displaced communities.

In 2007, the government approached a Canadian-based charity organisation, High Adventure Gospel Communication Ministers (HAGCM) for a helping hand. “In July 2007, we visited the Ongutoi site with Hon Musa Ecweru, the then Minister of Disaster Preparedness, Relief and Refugees at which time the returnees from the LRA conflict met us and requested help with health care,” recalls Don McLaughlin of HAGCM.

Having initially started sending some funds to just support a nurse and provide malaria medication, with distribution done in a single room of an existing old building, HAGCM eventually set up a locally-based charity in Uganda, High Adventure Ministries Uganda (HAMU) in September 2007. 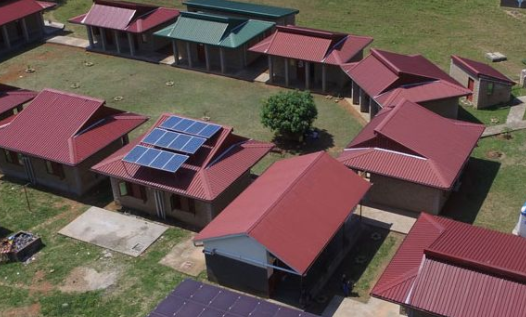 The humanitarian situation further worsened in 2008 when Ongutoi suffered a flood, further requiring medical support. In 2009, drought hit, and HAGCM, through HAMU, chipped in again with emergency food supplies and farming implements.

By 2010, a decision to build the Ongutoi Health Centre was reached. Having researched the market for a cost-effective building solution, McLaughlin says Hydraform’s alternative building system ticked all the right developmental elements including being cost-effective than traditional building methods; the implementation of the project with greater community engagement; the transfer of skills to the local community; and the advancement of the green agenda, to some extent.

“A major competitive edge of Hydraform’s interlocking blocks is that they save the cost of walling by about 50% compared with conventional blocks. This is largely due to the fact that no mortar is used to bond the blocks together. The blocks have tongue and groove joints that form interlocking masonry wall. When it comes to plaster you also save since the interlocking wall doesn’t have big holes that need to be covered with mortar when plastering,” explains Ryno Saayman, Marketing Coordinator at Hydraform.

Meanwhile, another key competitive edge is the ease of moving the machines from one site to the other. The Hydraform technology’s advantage is that you can take the machines anywhere and make use of the in-situ material that is available on the site. You don’t have to import costly material to your site, which also makes it very cost-effective for such disaster-hit communities.

Traditional farm bricks often used in many African countries have a very adverse impact on the environment, especially from a deforestation point of view. In many countries, these conventional brick making practices have led to massive deforestation in the respective areas because of the need to burn bricks, and Hydraform technology helped address this potential environmental hazard.

Between late 2016 and 2017, a further 10 medical staff residences and a single flush toilet facility on the health centre property were completed. McLaughlin also notes that all residences are equipped with water collection, storage and solar power for self-sustainability purposes.

“This health centre has now given free health care to over 150 000 people since we started in 2010, delivered almost 2 000 babies and provided hundreds of surgeries as well as HIV care and various health education programmes,” says McLaughlin.

“With the Hydraform system we built a fully self-sustainable health care centre for former LRA victims and we did it entirely with Ugandans. We installed and use solar power only and have installed a complete water collection/storage and purification system so every roof collects water and stores underground in cisterns (total 220 000 litres). The health centre is entirely off the grid and always has been, so it can be affordable for the poor and needy,” concludes McLaughlin.

Zakouma National Park has a unique system whereby the elephant herds use the park in the dry season but migrate up to 130km away when the rains come. These migration corridors and the wet season feeding grounds are critical to the survival of Zakouma’s elephants and are shared by local villages and, at certain times, the nomads as well.

The aim of the Elephant Schools project is to provide much needed schools and teachers in key villages within the extended elephant range. These ‘elephant schools’ will form an important link between local communities and the park by providing a platform for conventional as well as environmental education.

Hamida Bourma, manager of African Parks, explains: “Chad does not have a large commercial brick-making factory. All bricks are made out of either mud (raw and burnt) or cement. And cement costs about US$30 per bag delivered in the park, so we needed a method of construction that is not only environmentally friendly but also uses minimal cement. Hydraform was the perfect choice.”

Furthermore, since Hydraform machines are mobile, the machine can be moved to wherever the construction is taking place. Other advantages highlighted by Bourma are the relatively low cost (no mortar, minimal cement in block), and ease of construction, which is critical because most of the available labour in the rural areas is unskilled.

African Parks received its first Hydraform blockmaking machine in April 2013 after it was flown in thanks to a private donation. Since then, the organisation has completed the construction of one primary school and one secondary school. Work continues on a second primary school and, at the time of writing, the block of three classrooms was already at lintel height.

When the project is complete, it is expected that six primary and two secondary schools in key villages will have been built. Thereafter, and since the Hydraform belongs to Zakouma National Park, it will stay there to be used for other construction work or, perhaps, to continue with the school building programme after the initial phase is complete.