Hardy pigeon pea is my moneymaker

Hardy pigeon pea is my moneymaker

Nestled on the outskirts of Kathonzweni in Makueni County, Paul Mutinda’s pigeon pea farm is eye-catching, thanks to his crop that is ready for harvest. 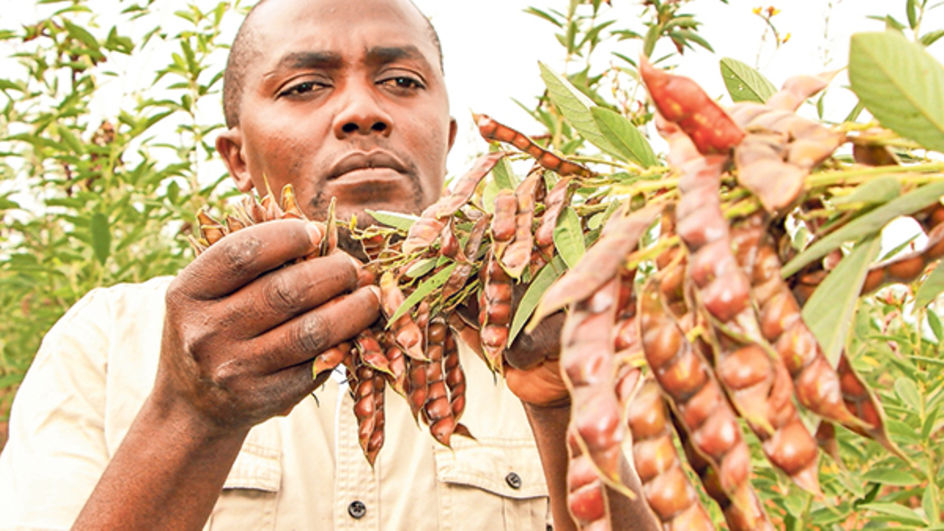 The pigeon pea season in the semi-arid region spans July to August, but Mutinda’s crop is ready and he has a secret for this.
Seeds of Gold finds the para vet supervising three workers harvesting the perennial legume.
“This plot mainly hosts M-Pesa,” Mutinda says as he reveals the moniker of the pigeon pea variety named ICEAP 01552. It is one of the fastest maturing varieties that is gaining currency in the region.
Farmers have nicknamed the variety after the mobile money service because it offers quick cash due to its faster maturity — three to four months – and is harvested green, enabling them to have the May season.
The medium duration varieties mature in five months and the long duration in eight months. Good management practices like digging terraces on the farm that retain water have also ensured Mutinda’s crop does well.
On his farm, thousands of pigeon pea bushes sag under the weight of brown pods, lazily swaying as the winds from the hills yonder blow down the plains.
Pigeon pea is a hardy crop that thrives in semi-arid regions such as Elgeyo-Marakwet, Embu, Kitui, Machakos, Makueni, Taita-Taveta and Tharaka Nithi counties.
Normally, planting of the crop starts at the onset of the short rain season. The seeds are planted on beds in the field, with farm preparation involving using tractors or oxen drawn ploughs.
Mutinda inter-crops pigeon peas with green grams and maize during the short rains season. “We, however, let the pigeon pea bushes thrive uninterrupted during the long rains season,” he says as his phone rings, interrupting him.
He later reveals that a distraught farmer whose cow had shown signs of sickness was seeking his urgent intervention.
Mutinda holds an animal health technician certificate from the Animal Health and Industry Training Institute in Nyahururu, where he graduated in 2009. The following year, he studied artificial insemination at ADC, Kitale.
CARVE YOUR OWN NICHE
The 35-year-old took a less followed path upon graduation. Instead of pursuing formal employment, he borrowed his father’s bicycle to move around the neighbourhood offering insemination and veterinary services. He would later buy a motorcycle.
Mutinda, who is also a dairy farmer, keeps six dairy cows, grows his own fodder and runs a veterinary shop at Kathonzweni Township.
He is part of a pool of animal health technicians that the Makueni County government uses from time to time when it seeks to roll out subsidised artificial insemination services.
Mutinda says his fortunes changed considerably when he added pigeon pea farming to his portfolio.
“A friend introduced me to pigeon peas in 2018 and I decided to approach the value chain differently,” he offers.
“Rather than wait for the grains to dry, I trade in the green commodity and I don’t regret doing that. To succeed in agribusiness, you must carve your own niche.”
He starts harvesting at least 300 kilogrammes of the product daily or two tonnes weekly in March, loading the 50kg bags on a pickup truck and transporting them to customers in Email on the border of Kajiado and Makueni counties, where he sells a kilogramme at Sh50. Harvesting, which starts in March, continues until October. 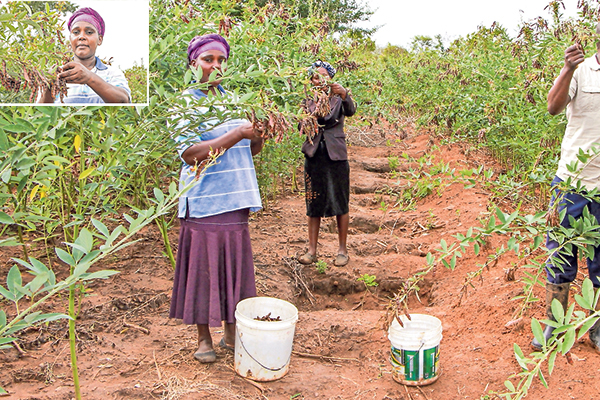 “The biggest buyers of the products are eateries, vegetable vendors and motorists on the Mombasa-Nairobi highway,” says Eunice Nthamba, one of the biggest distributors of the commodity.
“The fast-maturing varieties are good for consumers, farmers and traders because they dominate the markets for months.”
Throughout the pea season, Eunice receives at least two tonnes of green pigeon pea from local farmers, who include Mutinda, and sends at least 800 kilo to Mombasa daily.
The enterprise has enabled Mutinda, a father of two, to acquire pieces of land and build a homestead.
His three-acre farm at the heart of Kaiani village in Kathonzweni is among his latest acquisitions. It yielded 16 bags of maize and four bags of green grams in the last season.
GROWS IN SEMI-ARID AREAS
The economic meltdown caused by the Covid-19 pandemic notwithstanding, the demand for the green pigeon pea has remained high, according to Nthamba.
Green pigeon pea is used as a highly nutritious vegetable. The crop is used to make a thick sauce to accompany ugali, rice and chapati.
Dry pigeon pea grains, on the other hand, are a highly sought delicacy at the breakfast table, especially among Coast communities.
They are boiled and embellished with coconut milk to create a finger-licking Swahili delicacy known as ‘Mbaazi za nazi’ which is used to accompany buns, bread and chapati.
More importantly, pigeon pea is a commercial crop. Traders export tonnes of dry pigeon pea grains mainly to Asian markets where they are highly valued.
The pod borer is the common pest that attacks the crop while diseases include fusarium wilt, says Mutinda, adding his other challenge is high transport costs especially when it rains.
Advocates of climate change mitigation recommend pigeon pea among the best crops to grow in semi-arid areas. The legume is highly suitable for crop rotation because of its nitrogen-fixing characteristics.
“To reap maximum benefits, farmers should go for certified seeds from dealers rather than use recycled ones, which lead to cross-pollination and eventually reduce production,” says Geoffrey Mutahi of International Crops Research Institute for Semi-Arid Tropics (ICRISAT), which breeds pigeon peas.
Scientists are working round the clock to ensure that pigeon pea survives the vagaries of climate change.
Through a complex selection process, crossing and exposure to diseased plots at the Kenya Agricultural Research and Livestock Organisation Kiboko field station in Makueni County, improved varieties laced with desirable traits such as tolerance to pests compared to the traditional varieties are created.
****
Get it fast
Third widely grown legume
Pigeon pea (Cajanus cajan) is a legume crop in the family Fabaceae.
It is cultivated in semi-arid regions of Kenya.
Pigeon pea is the third most widely grown pulse crop in the country.
Pigeon pea is largely cultivated in Ukambani, on the Coast and in Rift Valley counties such as Elgeyo-Marakwet.
Pigeon peas are known as Nzuu in Ukambani.
Spray the crop against aphids, whiteflies and flower thrips, especially during the rainy season.
Source: Daily Nation