GROUNDNUT FARMING IN KENYA (and AFRICA)

In Kenya, peanuts are referred to us groundnuts and locally called “Njugu Karanga” (Swahili). Groundnuts are mainly grown in western Kenya by small scale farmers both for food and sale. These areas have a tropical climate suitable for farming.

There are two main varieties of peanuts in Kenya namely:

Bunch varieties are small, tastier and a highly marketable variety. It matures in 60 – 75 days. The runner is the larger variety and is preferred because of the high yields; it matures in 90 – 100 days.

Groundnuts are a rich source of protein and edible oils and add nitrogen into the soil and can be grown in poor soils. They take a shorter time span in the farm and have a huge market in Kenya. The monounsaturated and polyunsaturated fats found in groundnuts keep the heart-healthy. The high protein should be regularly incorporated in a diet for children, vegetarians and protein deficient people. They also contain high concentrations of the antioxidant polyphenols that inhibit the growth of free radicals, keeping infection at bay.

Benefits of Groundnuts
The benefits of groundnuts include the following:

Groundnuts grow well in warm areas, below 1500 meters above sea level with temperatures ranging 28-30 degrees census. Low temperatures affect their flowering and seed formation. They also need 500 to 600 mm of rainfall, well-distributed throughout the growing season. The crop can survive drought or reduced rain but yields will be low. Well-drained soils are needed although the crop can also grow well in clay soils.

Planting date is linked to rainfall distribution in the area and length of the crop season. Soil moisture must be sufficient to guarantee good germination. Seeds must not be sown immediately after heavy rains since they imbibe too much water, which causes rotting. This also results in excessive soil compaction, which may hinder germination. In general, early sowing improves yields (significant delay in sowing can reduce yield by 50%) and seed quality.
Seeds should be sown at a depth of 5–6 cm. To ensure uniform sowing depth, germination and crop stand, it is suggested that a groove 5–6 cm in depth is made along the rows for planting and, once the seed has been planted at the right depth and spacing, the soil is pressed down to ensure good contact with the seeds, enabling them to extract moisture more effectively.

It is important to sow groundnut seed in rows and at the right spacing as this helps:

Planting groundnut plants closer together results in individual plants setting fewer pods, but over a short period of time. Overall, this will ensure that the pods will be of a similar age and stage of development and, therefore, make it easier to decide when to harvest. Wider spacing will produce fewer yields per hectare. 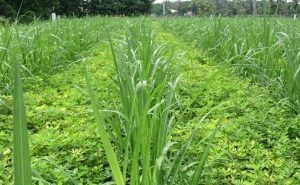 A well planned, crop rotation system can ensure good yields of high quality. In order to reduce risk in the farming system, groundnuts should be grown in rotation with other crops such as maize.

To avoid a buildup of pests and diseases, groundnut should not be grown continuously on the same land. A rotation of three years or longer usually reduces disease burden.

Groundnuts are susceptible to several infections and pests which reduce yield and quality.

The majority of insect pests that attack groundnut can be grouped as:

Determining when to harvest groundnuts is important. Since they can be flowering even at harvest time, a farmer must scout his garden on a regular basis. Hand pulling is one of the most used and suitable forms in sandy and loam soils while ox-drawn ploughs or hoeing can be used when drought sets in at harvesting time.

Damage to pods should be avoided as this can lead to aflatoxin contamination. When pods are damaged, moulds will enter and produce aflatoxins. The situation becomes worse when drying takes place on bare ground. Inadequately dried pods are another source of aflatoxins.
Since aflatoxins are becoming a major health concern, commercial farmers are advised to measure moisture content.

Harvesting by hand only is more suitable for the bunch/erect groundnut varieties in sandy, loam soils which are well-drained. When the soil is wet and heavy or very dry, it is much more difficult to pull up the whole plant without losing pods. 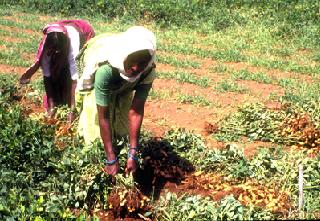 Hand lifting with a hoe or fork

By using a hoe during harvesting it is possible to lift plants out of heavy or dry soil with a reduced pod loss. Spreading/runners varieties can also be more easily lifted. Care should be taken not to damage the pods with the hoe as damage makes the pods susceptible to fungal attack. A hoe fork lessens the likelihood of such damage.

It is important to shake the plant after lifting to remove excess soil from the pods, particularly when the soil is wet or heavy. Soil stuck to the pods will lengthen drying times and produce better conditions for the development of unwanted fungal growth. 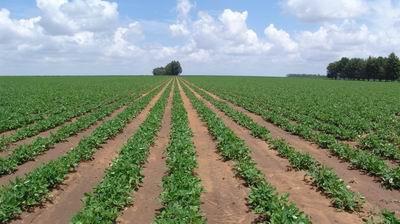 Groundnuts are a popular source of food throughout the world, including South Africa. In many countries, groundnuts are consumed as peanut butter or crushed and used for the groundnut oil or simply consumed as a confectionary snack roasted, salted or in sweets. In other parts of the world, they are boiled, either in the shell or unshelled.

A well planned, crop rotation system can ensure good yields of high quality. In order to reduce risk in the farming system, groundnuts should be grown in rotation with other crops, especially grass type crops. Groundnuts have been shown to improve the yield of subsequent maize and other grain crops up to 20%.

Department of Agriculture, Forestry and Fisheries 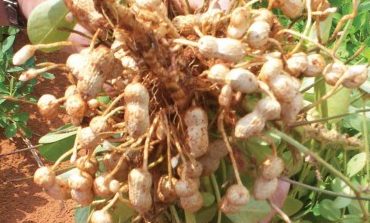 Groundnut is a self-pollinating, indeterminate, annual, herbaceous legume. Natural cross-pollination occurs at rates of less than 1% to greater than 6% owing to typical flowers or the action of bees.

Groundnut emergence is intermediate between the epigeal (hypocotyl elongates and cotyledons emerge above ground as in soya beans) and hypogeal (cotyledons remain below ground as in field pea types). The hypocotyl elongates, but it usually stops before the cotyledons emerge. Leaves are alternate and pinnate with four leaflets (two pairs of leaflets per leaf). The groundnut plant can be erect or prostrate (20–60 cm tall or more) with a well-developed taproot and many lateral roots and nodules. Plants develop three major stems, i.e. two stems from the cotyledonary axillary buds equal in size to the central stem during early growth. 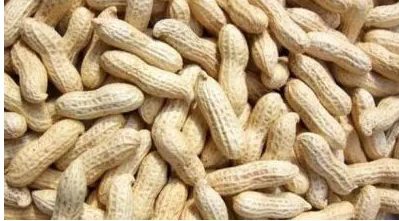