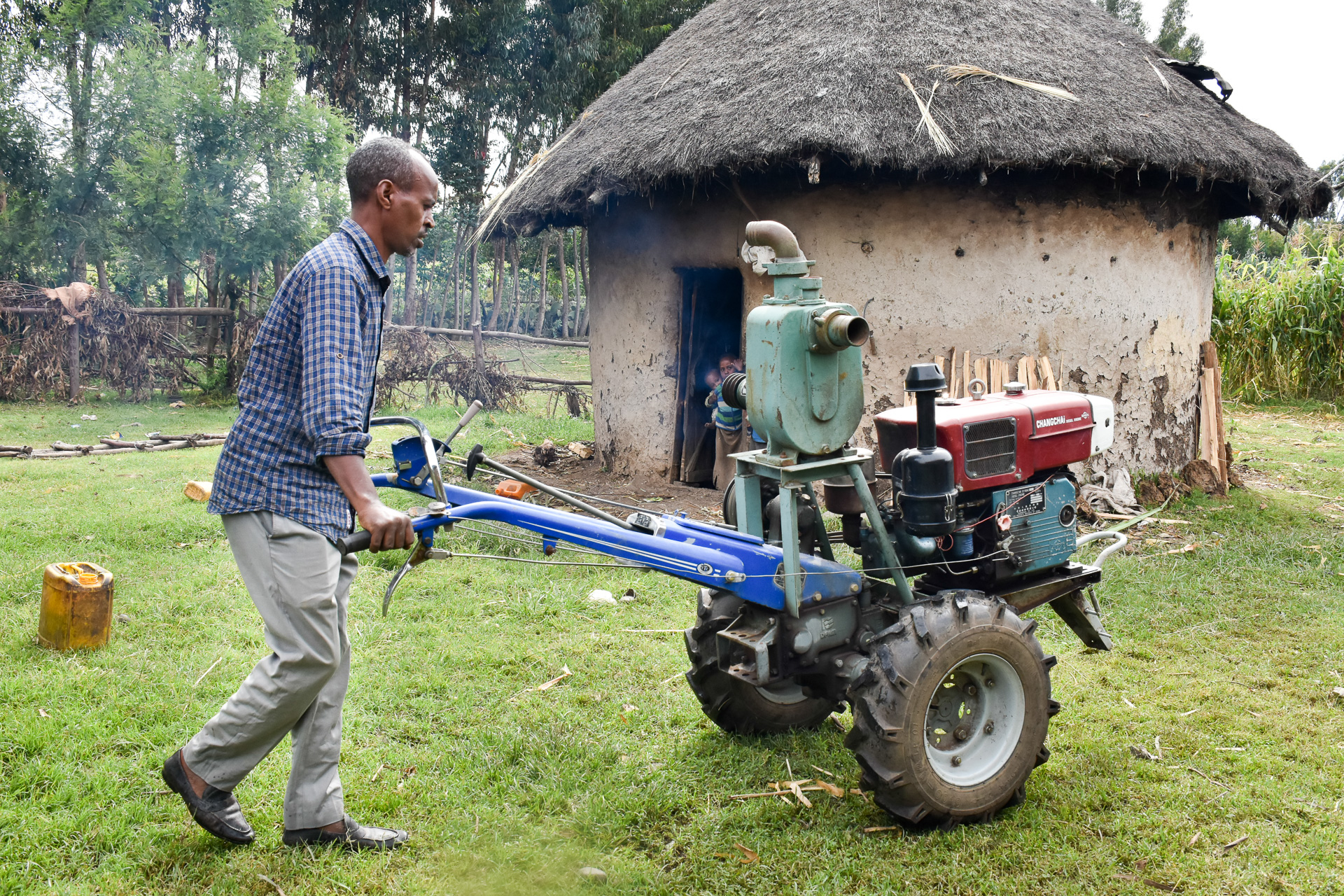 Two-wheel tractors are allowing Ethiopian farmers to boost their incomes and support their communities in times of need.

Farmers in the Bale area, in Ethiopia’s Oromia region, mainly produce wheat and barley. Temam Mama was no different — but some six years ago, the introduction of the two-wheel tractor offered him additional opportunities. This was part of an initiative of the International Maize and Wheat Improvement Center (CIMMYT) and the Africa RISING project.

Selected as one of the two farmers in the region to test the technology, Temam took a five-day training course to understand the technology and the basics behind operating calibrating and maintaining the equipment.

The two-wheel tractor is multipurpose. By attaching various implements to a single-engine, farmers can use it for ploughing, planting, water pumping, transportation, harvesting and threshing. For Temam, who had always relied on a rainfed agricultural system, the technology has high importance — he will be able to use the nearby river as a source of water for irrigation purposes.

To start off, Temam allocated 0.25 hectare from his four hectares of land for irrigation and planted potatoes for the first time. He was delighted with his harvest and the income he collected afterwards.

“From the first harvest, I was able to collect 112 quintals of potato and made roughly $1,529 in total,” said Temam.

His productive journey had just started. This income allowed Temam to keep growing his business. He bought a horse and cart for $550 and taking the advice from the project team, he constructed a Diffused Light Storage (DLS) system to store his potatoes for longer.

To diversify his income, Temam occasionally provides transport services to other farmers. Over time, Temam’s financial capital has continued to grow, bringing new ideas and a desire to change. He went from a wooden fence to a corrugated iron sheet, to an additional three rooms by the side of his house for rentals.

He is fortunate for having access to the river and the road, he explains. He also sees new opportunities emerging as the demand for potato in the market continues to grow. The price for one quintal of potato sometimes reaches $76 and matching the demand is unthinkable without the two-wheel tractor, he says.

In addition to the two-wheel tractor, he has also bought a water pump to enable him to increase the area that he can grow irrigated potato, garlic and pepper on. His target is to have two hectares irrigated soon. 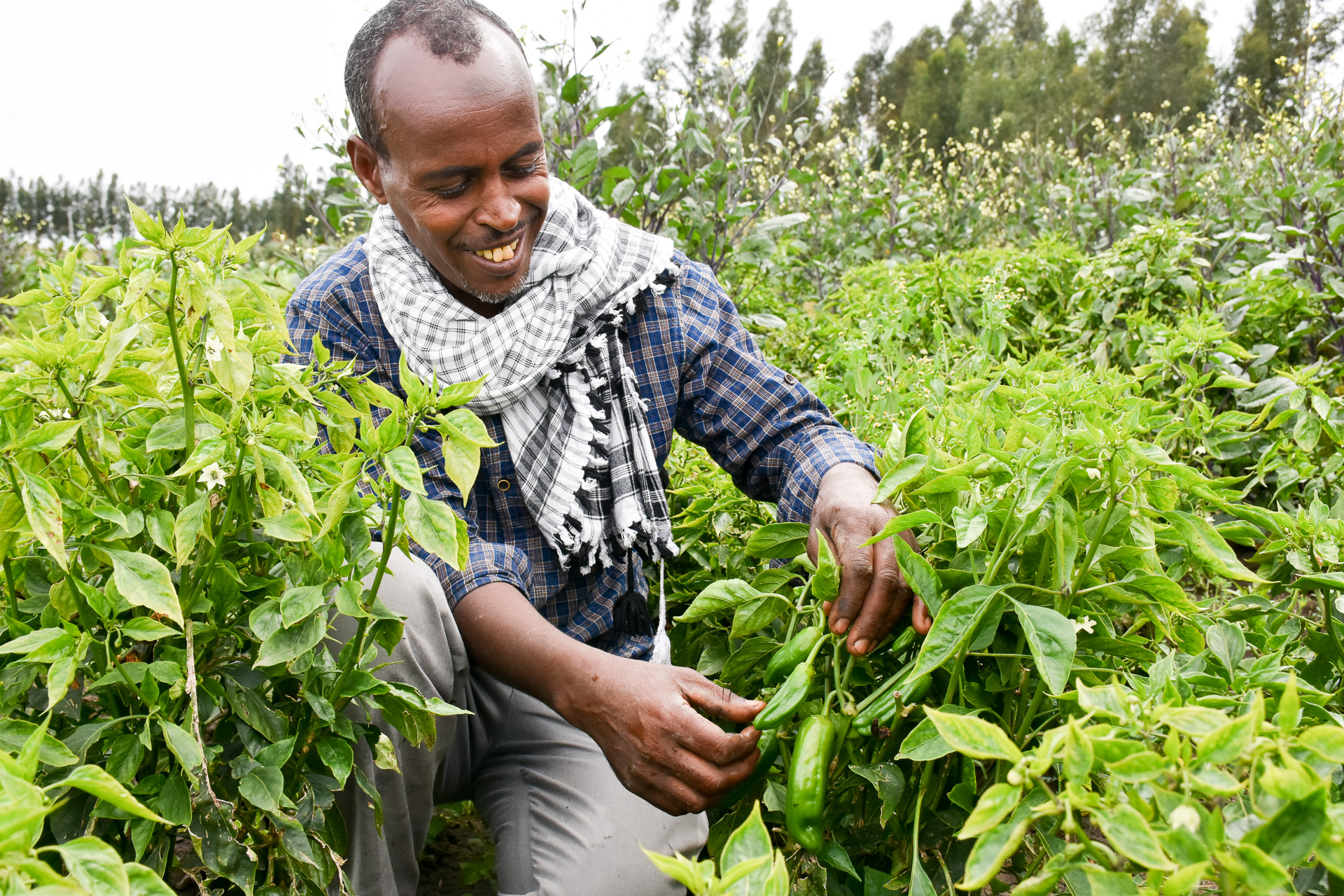 Farmers diversify crops in their fields and food on their plates

The future is bright

With his wife and four children, Temam is now living a well-deserved, healthy and exemplary life. Tomato, chilli and onion now grow on his farm ensuring a healthy diet, as well as diversified and nutritious food for the family. His economic status is also enabling him to support his community in times of need.

“As part of my social responsibility, I have contributed around $152 for road and school constructions in our area,” noted Temam.

Under the Africa RISING project, Temam has proven that irrigation of high-value crops using two-wheel tractor pumping really works, and that it increases production and the profitability of farming. He has now stepped into a new journey with a bright future ahead of him.

“I plan to sell my indigenous cows to buy improved breeds and, in two to three years’ time, if I am called for refreshment training in Addis Ababa, I will arrive driving my own car,” concluded Temam.