As the current pandemic and restrictions create labour constraints, CIMMYT experts discuss the role scale-appropriate farm machinery can play in addressing them.

The COVID-19 pandemic continues to transform the way the world operates, and agricultural production systems are not exempt.

Even in countries that have identified the agricultural sector as an essential one, ongoing restrictions on transport and freedom of movement are causing disruptions across the value chain — with potentially devastating impact on already fragile food systems in Latin America, sub-Saharan Africa and South Asia.

With this in mind, systems agronomists and mechanization specialists at the International Maize and Wheat Improvement Center (CIMMYT), discuss the impact of restrictions on agricultural labour and production, and the role farm mechanization can play in addressing new challenges.

What are the implications of the agricultural labour shortages that are emerging in Africa and Latin America as a result of COVID-19 restrictions? 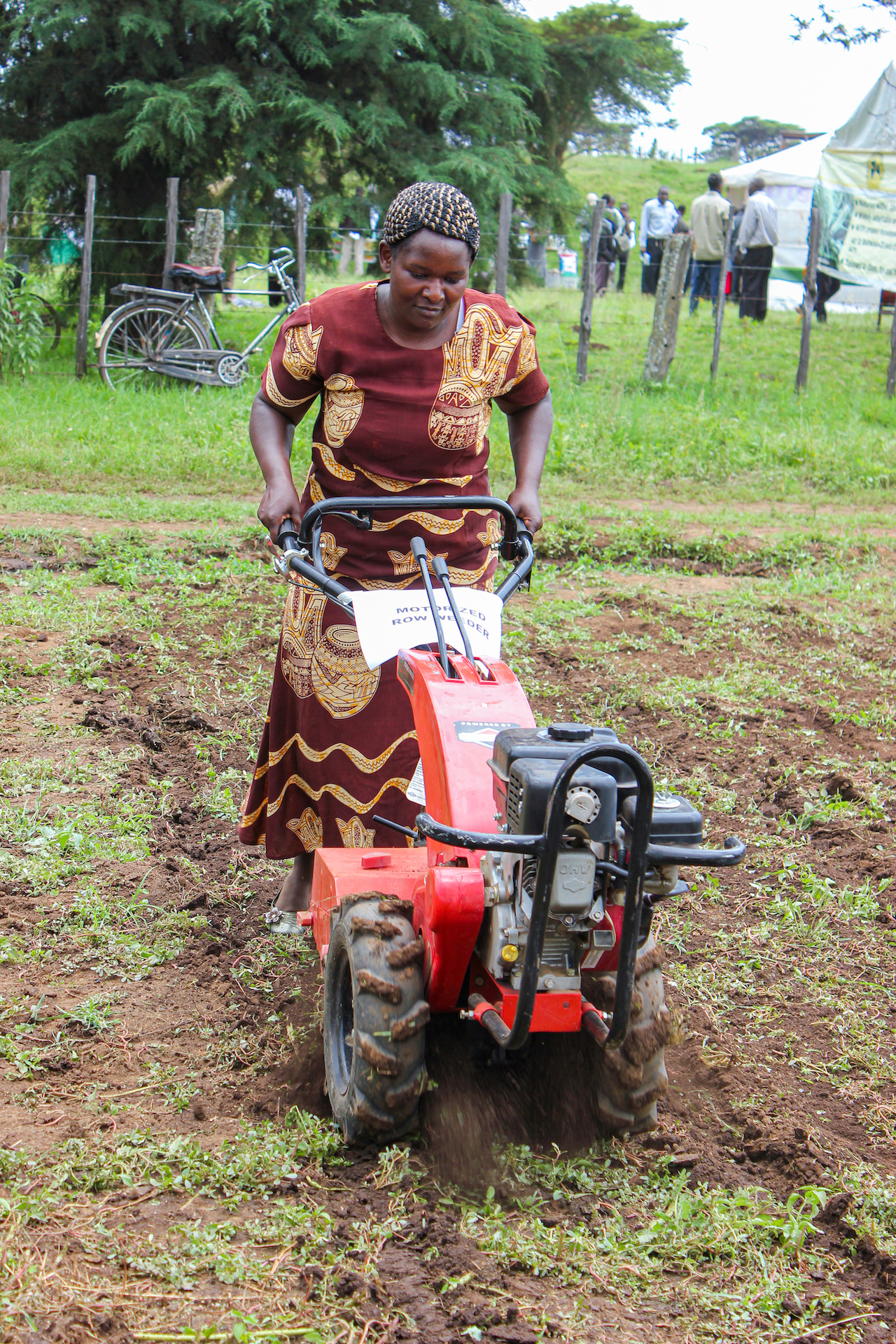 A woman demonstrates the use of a mini-tiller in Naivasha, Kenya. (Photo: Matt O’Leary/CIMMYT)

Frédéric Baudron: The pandemic has demonstrated that food production systems around the world — even in countries where agriculture is thought to be highly mechanized — are highly dependent on farm labour.

Africa is often presented as being dominated by farms which rely mainly on the labour of family members. Therefore, one could expect that Africa would be spared from the consequences of unavailability and/or unaffordability of hired labour. However, a recent CIMMYT study shows that farming systems in Africa are far more dependent on hired labour than commonly thought and that the quasi total dependence of smallholder farming on family labour is a myth. Depending on the farming system, a complete loss of hired labour could lead to a productivity decrease of up to 20% in Eastern and Southern Africa. Hired labour is also likely to be replaced by child labour.

Because most products on the continent is rainfed during a single season, most farmers only plant and harvest once per year, making the timing of each task critical. A delay in planting because of labour shortages — as will soon occur Ethiopia — could lead to dramatically reduced yields. A delay in harvesting — as is currently experienced in Zimbabwe — means a large fraction of the crop is likely to be spoilt in the field.

Jelle Van Loon: The situation is similar to Mexico and the general Central American corridor, although the main production cycle is only just starting. Proper land preparation and timely sowing are critical, not only in terms of food production and achieving proper yields, but also to ensure that farmers have a stable income at the end of the year. This is especially important now, as financial and food reserves are shrinking at a faster pace due to COVID-19 restrictions that heavily affect demand on informal markets. 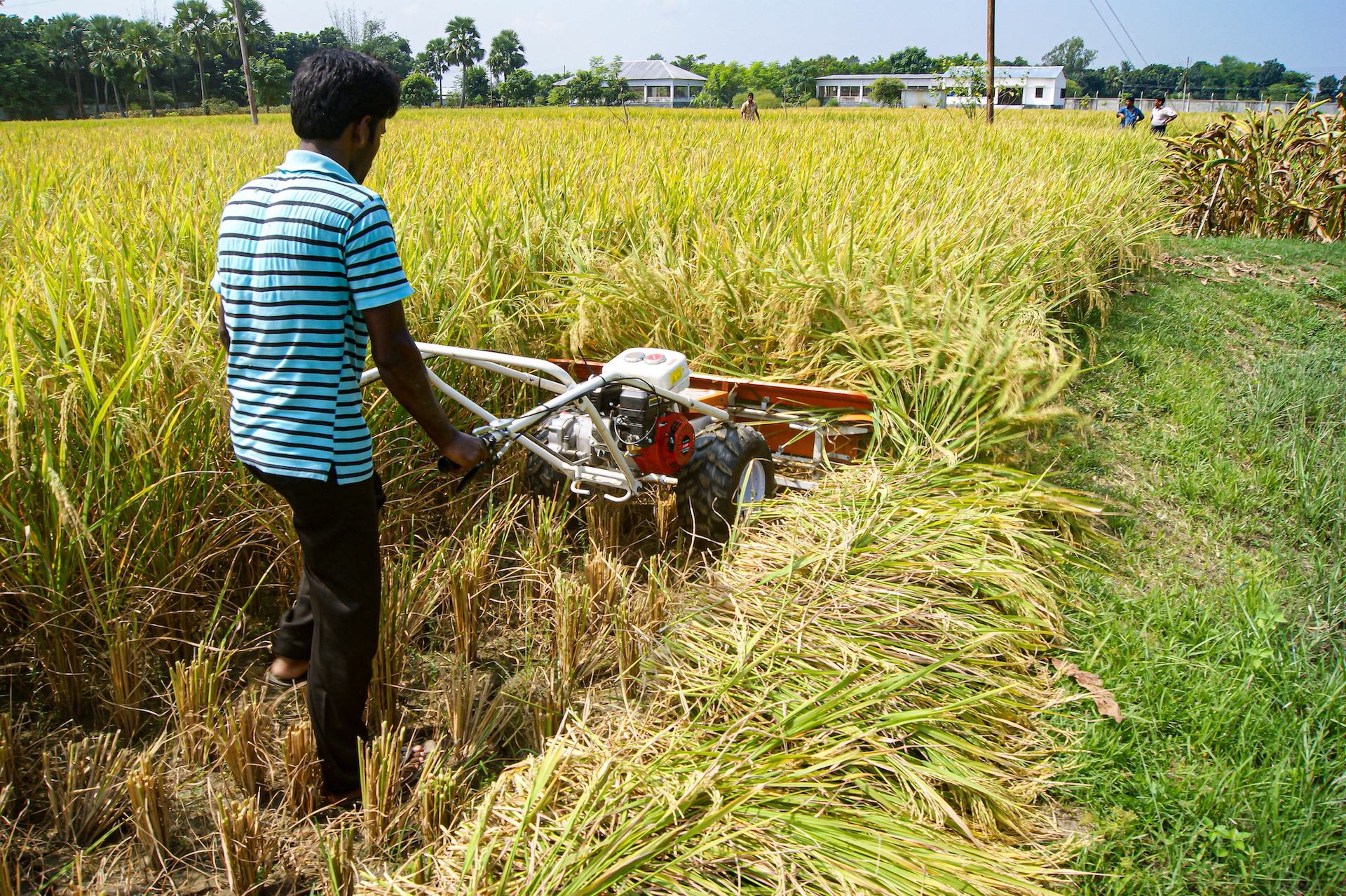 An operator demonstrates the use of a reaper in Bangladesh. (Photo: CIMMYT)

Are you seeing a similar situation in South Asia?

Timothy Krupnik: Depending on the country, we’ve seen either abrupt interruptions in the movement of agricultural labourers — for example in India where millions of migrant labourers have not been able to travel home during lockdown — or an influx of people from urban areas who fled to their villages when lockdown began.

In the latter case, one might expect this to increase labour availability for farming, but we tended to observe the reverse. People remain largely frightened of coming out of their homes, so even in rural areas which saw an influx of people, labour availability has not necessarily increased. Where labourers are willing to work, our initial scan of the evidence indicates that daily wage labour costs have also increased considerably due to risks of the infection spreading. In either situation, smallholder farmers who need to hire labour to assure crucial crop management activities like planting or harvesting are suffering. There are reports emerging also of increased child labour in the region as schools are closed and resource-poor farmers are allocating family members and children to work where they can’t afford to hire labour.

M.L. Jat: I would like to cite the specific example of intensive rice-wheat rotation in India’s breadbasket and the Green Revolution corridors in the western Indo-Gangetic plains, which provide the bulk of cereals to the national food basket. An ex-ante analysis on the consequences of the reverse migration of the agricultural workforce and social distancing due to COVID-19 revealed that a delay in the transplanting of rice seedlings by two weeks is likely, which will delay rice harvesting and consequently delay the planting of wheat. This will potentially lead to rice and wheat production losses of 10-25%, worth up to $1.5 billion.

In addition, the shorter turn around between harvesting rice and planting wheat may further increase the incidence of rice residue burning. This is a major problem which creates significant health issues and may exacerbate the threat of COVID-19 by increasing both infection rates and disease severity.

Krupnik: The situation has increased interest and policy to support the use of scale-appropriate machinery for operations like harvesting. In Bangladesh, for example, there was a recent and very serious risk of losing much of the rice harvest as the monsoon has started early and flash flooding has been a concern. Without manual labourers to harvest the crop, CIMMYT-led projects like the Cereal Systems Initiative for South Asia – Mechanization and Extension Activity (CSISA-MEA) have played a key role in assisting the movement of combine harvesters and crop reapers to areas at risk of crop losses and helping to assure the rice crop is harvested on time. 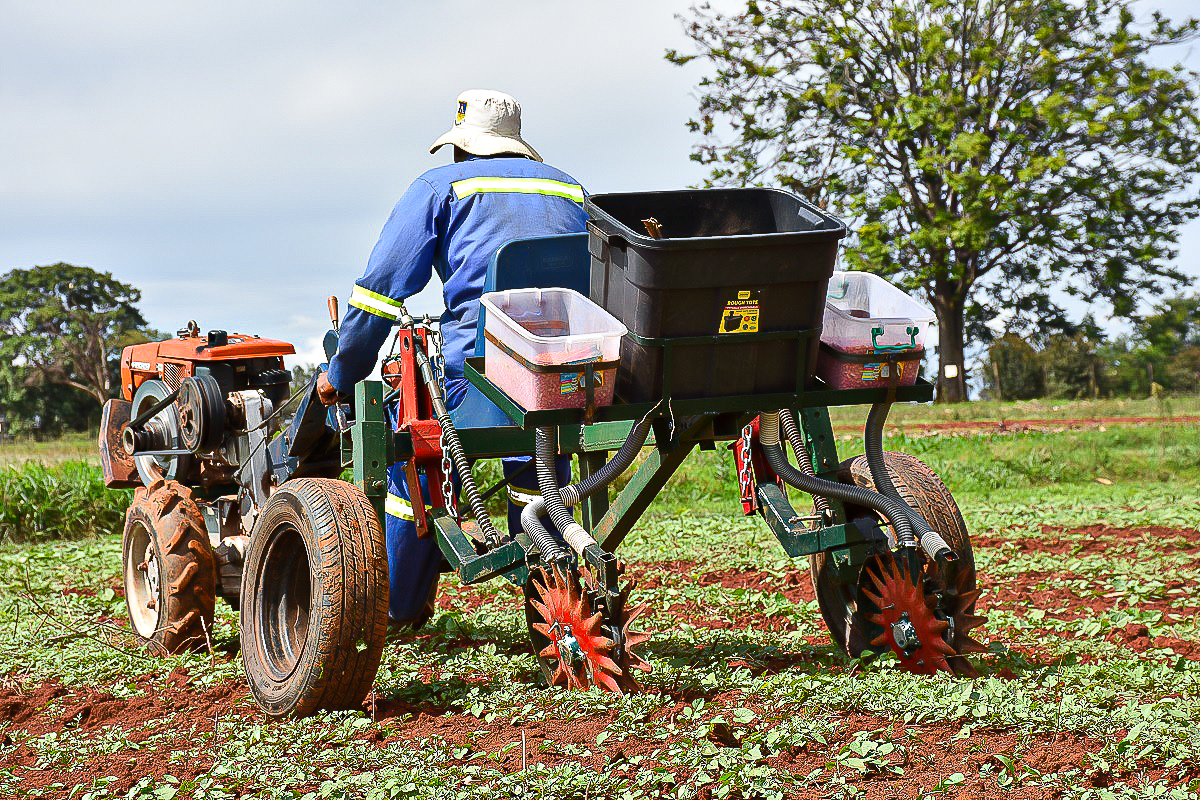 An operator demonstrates the use of a starwheel planter in Zimbabwe. (Photo: Frederic Baudron/CIMMYT)

It sounds like these machines were instrumental in avoiding crop losses. Does this mean that mechanization has a key role to play in lessening the impact of these labour shortages?

Krupnik: During the COVID-19 crisis, scale-appropriate machinery has become even more important for mitigating labour shortages.  We work to facilitate the availability of scale-appropriate machinery not only so that farmers can buy and use the equipment, but also by encouraging those who own types of machinery to become entrepreneurial service providers who offer efficient and mechanized land preparation, planting, irrigation, harvesting and post-harvesting to other farmers on an affordable fee-for-service basis.

This is a win-win situation for farmers who can’t access or afford the escalating costs of labour. In the COVID-19 crisis, these arrangements assist in responding to the labour crunch in locations where resource-poor farmers are most in need and also allow farmers to get crucial work done while maintaining and encouraging social distancing.

Baudron: Over the past seven years, CIMMYT and its partners have fine-tuned technologies and developed delivery models — based on rural service providers supported by private sector companies — to scale the use of small machines in East and Southern Africa. These are profitable for both farmers and service providers and reduce labour requirements tremendously.

In Zimbabwe, we found that labour requirements were 15 times lower when establishing a maize field with a direct seeder pulled by a two-wheel tractor, and 23 times lower using similar technology for establishing wheat in Rwanda, compared to the conventional method based on labour and draft power. A ton of maize that would take 12 people a full day to shell manually, can be shelled in one hour using a small double-cob sheller that costs about $300.

Jat: Rapid policy decisions by sub-national and national governments on facilitating more mechanized operations in labour-intensive rice-wheat production regions will address labour availability issues while contributing to productivity enhancement of succeeding wheat crop in rotation, as well as overall system sustainability. Our ex-ante analysis on the implications of labour shortages in rice-wheat rotation in the western Indo-Gangetic plains due to COVID-19 indicates that adoption of scale-appropriate farm mechanization has the potential to stabilize the food production as well as reducing the income losses and air pollution surges in northwest India. 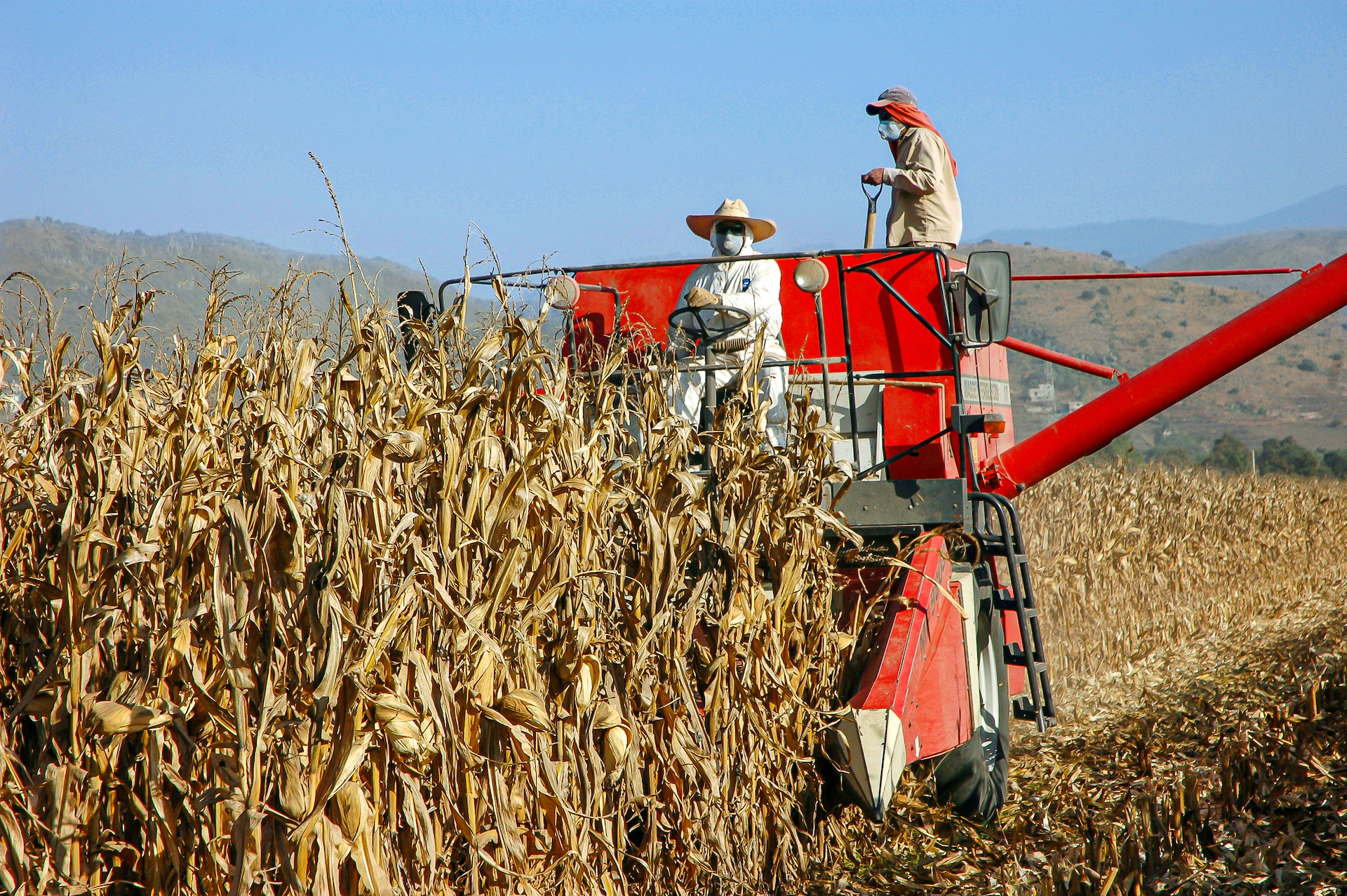 The situation in the regions each of you have mentioned is unique, but are there any global trends that you’ve noticed? And if so, can other regions learn from these localized experiences?

Krupnik: A huge part of what we do as a research and training institute is to facilitate exchanges of information across continents and countries. Different types and designs of machinery that can be used in similar circumstances can be shared, as can business models supporting service providers.

Importantly, part of the concept of ‘scale-appropriate mechanization’ is also learning when and where machinery makes sense — where labour is not scarce and rural communities are highly dependent on income from labour to sustain their communities, some forms of mechanization may not be appropriate. We work to understand these dynamics and target the right machines at the right time and right places.

Van Loon: In addition to reducing pressure on available labour and alleviating drudgery, modern farm equipment tailored to the needs of smallholders can also increase competitiveness, as it allows for higher precision and efficiency.

In this sense, scale-appropriate mechanization can stimulate rural transformation incentivizing short and efficient value chains while ensuring stable food provision — aspects that have become essential to navigating the present crisis.

Has the current pandemic brought up any new perspectives in terms of how you consider labour and mechanization?

Baudron: We often look at yield and area planted in staple crops to assess the food security situation of a country during a particular year. This pandemic has shown us that we need to pay more attention to labour productivity. In many countries, policy-makers and development agents fear that mechanization will displace labour, but the dependency of staple crops on labour is a threat to food security, as we currently see in Africa and South Asia.

If the production of fruit, vegetables, cash crops, and so on will continue to depend on manual labour, it is essential in my view for critical tasks in the production of staples to be mechanized — particularly planting and harvesting. This will ensure the resilience of national food systems in the case of a future disruption similar to the COVID-19 pandemic.