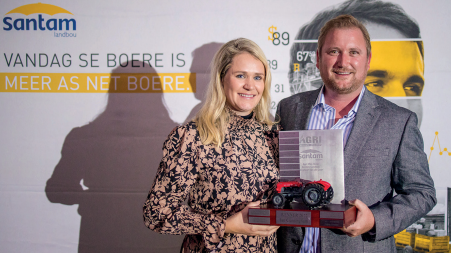 In 2009, his family bought Fine Farms in Elgin, after they sold a timber plantation in KwaZulu-Natal to the government. Following the completion of a finance and economics degree at the University of Cape Town, Cunningham worked in the banking and asset management industries before joining Fine Farms in 2013. Over the years, Fine Farms established itself as one of the most respected fruit growers in the Elgin area. In 2020, the family secured strategic water reserves for the business by acquiring a neighbouring property called Carmel. Later that year, in the midst of the COVID-19 pandemic, Cunningham made his boldest move yet when he bought the High Noon apple and pear farm outside Villiersdorp. Across its properties, the business now cultivates 330 ha of apples, pears and wine grapes.

Cunningham believes that part of the reason he won the award is because of Fine Farms’ forwardthinking labour practices, which emphasise knowledge transfer and the inclusion of workers in decision making. The company is in the process of instilling the same culture at High Noon. Fine Farms and High Noon employ close to 700 workers during picking season. To accurately keep track of their wages, Cunningham uses Farm Costing Solutions (FCS), a leader in hardware and software solutions for managing farm expenses.  According to him, FCS has been a “game-changer”, especially to record piecework activities during picking season. 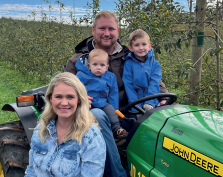 The FCS Piecework module works as follows: each worker is issued with an RFID tag. Under the supervision of a manager, they swipe their tags against a reader device once they’ve filled a bag. The system then automatically calculates each person’s wages based on the number of bags they had picked during the day. The FCS system incentivises workers and allows management to easily track the performance of each individual. “Together with FCS, we have created a culture where workers can determine what they earn. It is not a fixed threshold and it is not uncommon for some hard-working, motivated labourers to earn significantly more than minimum wage,” he says.

In addition to Piecework, Cunningham uses the FCS Crest Payroll solution as well as the Time and Attendance module, which accurately monitors the times when workers arrive in the mornings and leave in the evenings.

FCS serves some of South Africa’s most well-known agricultural businesses such
as the Du Toit Group, De Keur Estate and Boschkrans Farming.