Drought programmes in Ethiopia should support communal access to groundwater

Why drought programmes in Ethiopia should support communal access to groundwater

Like many countries in East Africa, Ethiopia is highly vulnerable to drought. Since 1965, Ethiopia has experienced 15 severe droughts affecting more than 65 million people and causing serious economic damage. 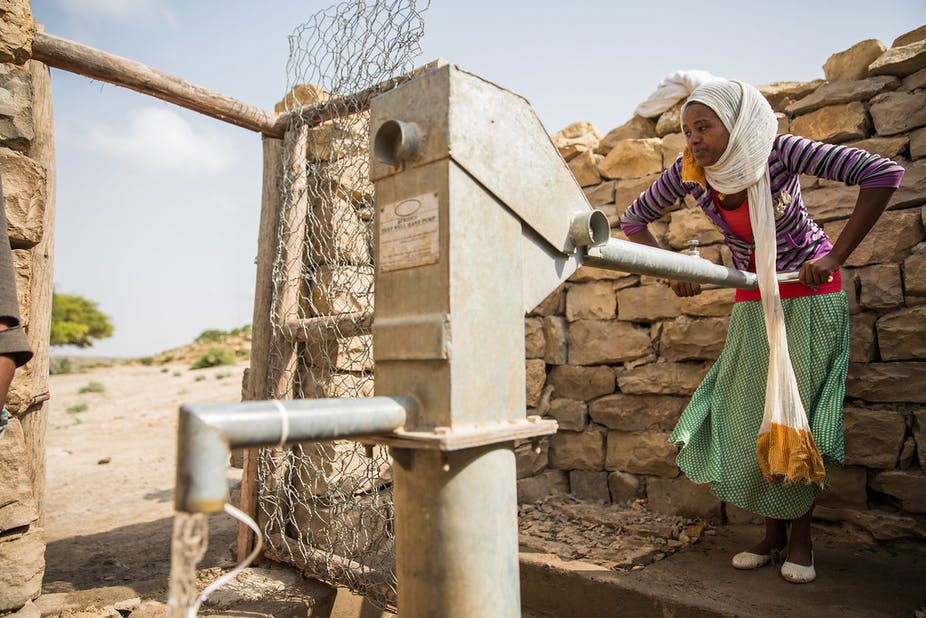 Most recently, in 2015 and 2016, Ethiopia suffered a harsh drought which forced more than 10 million people to rely on emergency aid due to crop and water supply failures.

In dispersed rural communities, such as those found in Ethiopia, water supply is highly decentralised. Communities often rely on a number of small communal sources where people collect water. These could be hand-pumps, springs, hand-dug-wells, or motorised pumps in boreholes.

Hand-pumps are installed on boreholes or wells, often by the government or NGOs, and usually, tap into groundwater at depths of between 15 to 50 metres. In other areas, motorised boreholes are used to access groundwater hundreds of metres deep and are powered using solar or diesel generators.

Communal sources are often managed and maintained by communities. So ensuring continuous access to water supplies during a drought can be challenging because communities often lack the capacity to repair problems.

What usually happens during a drought is that the focus of intervention programmes is on building more water supply infrastructure. For example; drilling more boreholes and digging more wells.

In a new study, we wanted to know what the most reliable and accessible water source types were for communities during drought. We used data that was collected by UNICEF monitoring teams during the drought in 2015 and 2016.

We found that communal hand-pumped boreholes and motorised boreholes were what communities accessed the most – roughly 400,000 people, about half of the number of people in the study, used them. The others relied on springs, hand-dug wells and open sources, such as rivers. A small number of people relied on emergency water trucking. Hand-pumped boreholes were also associated with the shortest travel times for water collection.

My colleagues and I, therefore, argue that it’s best for projects to support communities in the use of pre-existing boreholes –, particularly hand-pumped boreholes. This is because so many people already rely on them and because they access to water that is stored underground and resilient to changes in climate.

Neglecting existing communal water supplies risks leaving many of the most vulnerable and remote communities unserved. In addition, evidence shows that creating new water sources during drought takes time and can leave additional management and cost burdens on communities, or the local government when the drought ends.

It’s crucial that the government ensures the boreholes are properly monitored and repaired if they break down.

During the drought, monitoring teams – set up by UNICEF as part of an emergency intervention – were deployed for three months to monitor the status and performance of different water source types.

The teams collected data about whether sources worked, how many people used them, the amount of time spent collecting water and how much water was collected. We used the data to see how different water points performed.

Monitoring teams used a mobile phone app which allowed information to be passed around very quickly. This meant more boreholes worked because maintenance teams were able to quickly respond and prioritise repairs.

By fixing boreholes, many more users had access to water. In the case of hand-pumps, it meant travel times to collect water were reduced. The ability of communities to access multiple safe groundwater sources also helped to reduce pressures on individual water sources.

Our study highlights the importance of hand-pumped and motorised boreholes for ensuring continued access to water during a drought. However, we found that while hand-pumps were quickly fixed, repairs for motorised boreholes were slower. This is because more complex technologies are harder to repair and the skills required are often in short supply.

Our results also suggest caution is required as the rural water supply sector plans for the future. Under the Sustainable Development Goals, communal water sources – such as hand-pumps – are not classified as safely managed and could be neglected for more complex technologies, including on-plot piped water supplies. But, in a similar way to the motorised boreholes in our study, the pipes and pumps used in such systems may break down more often and could take longer to repair, increasing drought vulnerability in areas where there is a lack of financial resources and where it is challenging to find adequate skills for maintenance and repair.

There is already evidence, albeit, from Vietnam, that poorer households have lower rates of access to piped water supplies than higher-income households. Thus, without continued investment in basic communal sources, such as hand-pumps, poorer households may be forced to return to hand-dug wells, springs and surface water sources that offer little resilience to drought and are more vulnerable to contamination.

Ensuring communities are able to access multiple safe groundwater water sources, primarily via hand-pumped boreholes but also motorised boreholes, supported by real-time source monitoring and responsive and proactive maintenance and repair, is a reliable way to ensure continued access to water during a drought.

Professor of Hydrology, University of KwaZulu-Natal