The De Keur farm is home to a bunch of superwomen who have risen through the ranks in what was previously a man’s world. We get to meet some of them as they share their farming journeys and future aspirations 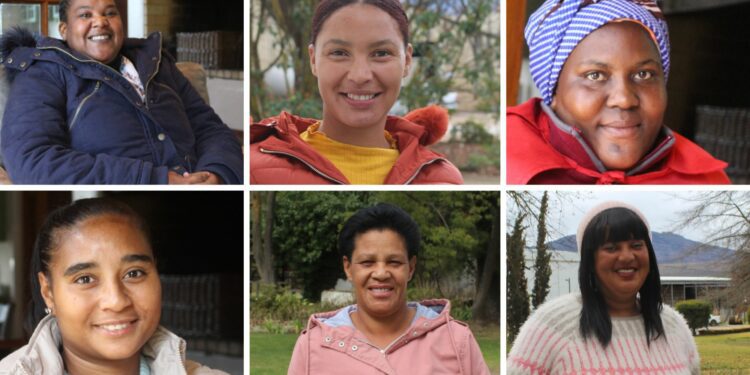 From a healthcare worker to a day-care teacher and packhouse production manager. The De Keur Group in the Western Cape is known for empowering women, many of whom started as general workers on the farm. Elise-Marie Steenkamp visited the farm in the Koue Bokkeveld of the Western Cape. 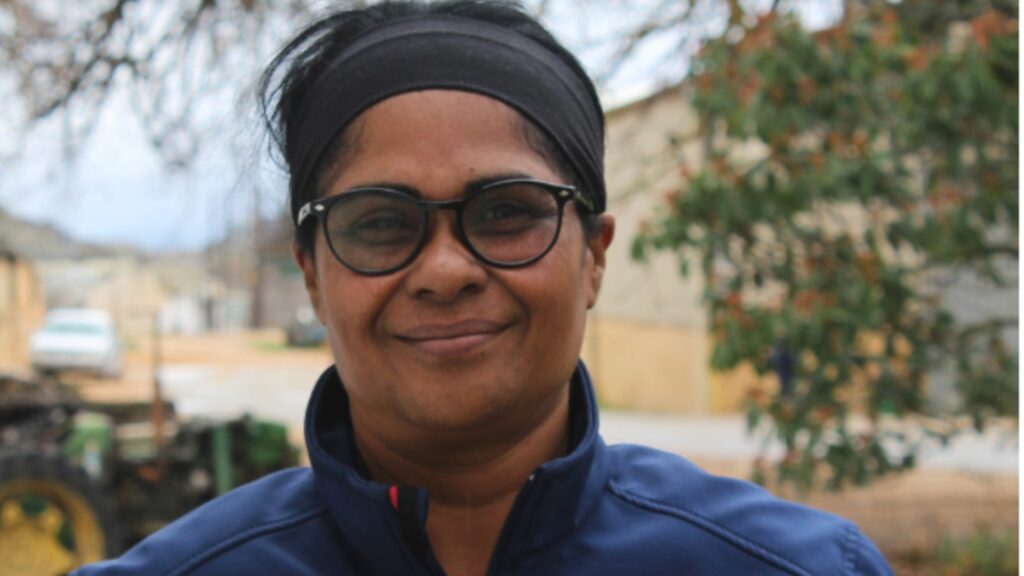 Moving up the packhouse ladder

Lena du Toit has been De Keur’s fruit packhouse production manager for the last 12 years. She started as a jack of all trades in the company’s packhouse in 1999. After two years as a general worker, she attended a course whereafter she was appointed as a team leader.

She spent the following four years working as a team leader. As things modernised in the packhouse, Du Toit was later hired as a supervisor. In 2010, she applied for the production manager position – a position she’s held for the last 12 years.

“During the season, I have around 380 people who work under me,” she says.

Though many people may find this stressful, Du Toit describes it as a perfect environment. “I enjoy high-pressure times when the adrenaline is pumping and I’m crazy about agriculture. There is anything that could make me want to move away from it.”

Though most of the packhouse staff are women, being a woman in the agriculture sector still has its challenges. “There are a few men who struggled to accept that they have to listen to a woman since it was usually a man in my role,” she says. “The men have come to accept me through the years.”

Driving change on a four-wheel motorbike

Natasha “Nadi” Jacobs was born and raised on one of the De Keur farms and has worked there since 2013 when she started labelling in the packhouse. In 2021, she became the first women production assistant on the farm.

She oversees 27 hectares of onions and is responsible for a group of 130 people who work under her.

“I am there when the plant goes into the ground and see it through all the way until the onion is loaded on the truck,” says Jacobs. She, like many other workers on the farm, was given the opportunity to attend courses that enabled her to advance her career. She hopes to continue moving up in the company.

“My 10-year plan is to arrive in my double cab bakkie and tell people how to manage their fresh produce,” Jacobs laughs.

Jacobs currently drives a four-wheel motorbike on the farm, which she says is the closest she’s ever come to riding a bicycle. “My grandmother said that ladies don’t ride bikes, so I never learned.”

‘Google is my best friend’

Though Jacobs loves her job at De Keur, she admits that being a woman in agriculture sometimes has its drawbacks. She is the only woman in her position on the farm and most of the permanent workers who fall under her are men. “It’s sometimes a little uncomfortable to be the only woman. I mostly work with men who are older than me. I’ve learned to stay calm.”

Jacobs refuses to shrink back. “It isn’t a man’s world anymore. Why should women stand back? It’s my wish that more women get involved in agriculture.”

Her passion for her job is what drives her. “It’s hard work, but I love what I do.” What she hasn’t learned in courses or through experience, she researches. “Google is my best friend. I’m learning as I go.”

From general worker to teacher

De Keur has day-care and pre-primary schools on its farms for children of farmworkers. Legina Balani is a teacher and acting head of the Rocklands school where she has worked since 2011 after being a general worker at De Keur for four years.

The children at the school are between three months and five years old. Balani is one of five teachers. She has two sons of her own and wanted to go into social work when she was younger, but the opportunity never presented itself. At the school, she says she has found her passion.

“I grew up on a farm and have a deep love for agriculture. It’s great to see that even as a general worker, or a farm schoolteacher, that you are making an impact,” she explains.

Having been around agriculture for the greater part of her life, Balani knows the gender dynamics. “It is difficult to be a woman in agriculture; there are challenges but we women are strong.”

De Keur sent Balani on an early child development course and in 2017 she achieved her NQF level five. In the same year, she completed her first baby course. Though, by that time, she had a lot of experience with babies, and says she got a lot of tips and new ideas that she has incorporated into her job.

Despite not having professional experience under her belt when she started, De Keur gave her the opportunity. “I am proud of the work I do and I’m so grateful for the opportunity that was given to me,” says Balani. “There are opportunities on the farm to grow. Women have to learn to grab these opportunities.” 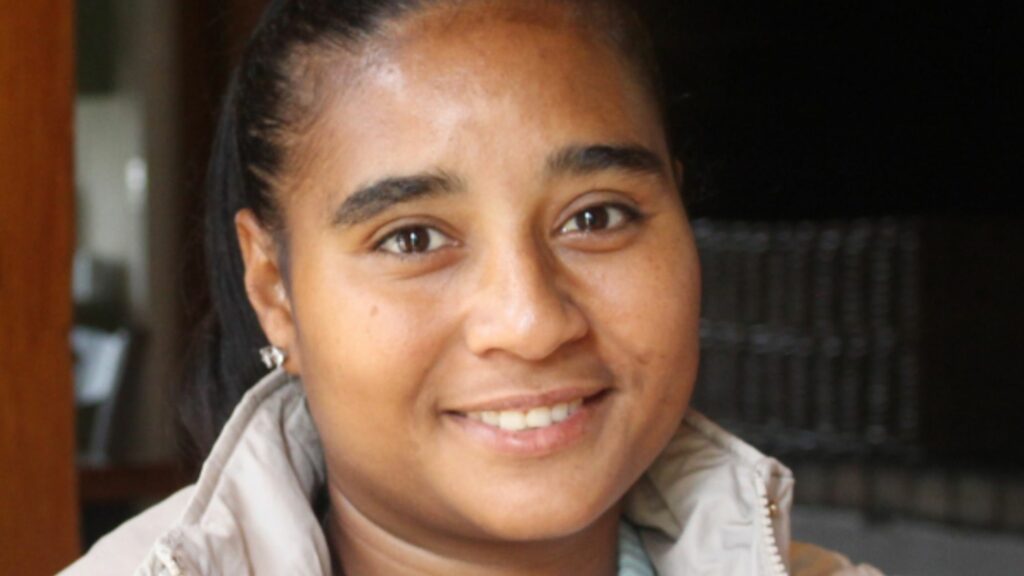 “After school, I didn’t know what I wanted to do so I started working on the farm,” says Lydia Olivier. Today, she works in the De Keur Group’s wages office. Photo: Supplied/Hortgro

Juggling a newborn baby and a tough job

Lydia Olivier has worked at one of De Keur’s wages offices for the last seven years. Though she doesn’t spend much time in the fields anymore, she started as a general worker in 2010 and worked herself up to her current position.

She also grew up on one of the De Keur farms and says, “After school, I didn’t know what I wanted to do so I started working on the farm.”

One of her managers asked if she knew how computers worked and put her on a trial run to see if she could handle an office job. She now manages the farm’s wages office by herself.  “I guess it helps that I like to work with numbers as well,” Olivier laughs.

Olivier says there are times, especially during the season when her job gets very stressful. On top of that, she is a new mother and has had to juggle having a newborn and a full-time job. Olivier says that one must grab the opportunities that come your way. “I knew I didn’t want to be a general worker forever. I knew I was going to have to find other opportunities.”

‘We must not stand back’

In her 27 years on the farm, Geraldine Solomons worked her way up from a general worker doing “anything and everything” on the farm to the administrative clerk in a packhouse. Both Solomons’ parents were workers on the farm and she knew watching them that agriculture is hard work but also very rewarding.

“After matric, I decided to stay and work on the farm. I will admit that I was not crazy about agriculture at that time but now I know it is for me,” she says.

Today, she looks forward to going to work every day. “I can’t imagine doing any other job.”

Her eldest son also works on the farm. Though Solomons does not work in production anymore, her office job is integral to agriculture. “There are opportunities for women in agriculture. We must not stand back and grab the opportunities that come our way.”

Growing a thick skin on the farm

Melony Jacobs has been on the De Keur farm since 2015. In 2022, she received the latest in a string of promotions to become the administration and stock leader in the equipment sheds across all the farms.

She says, “I actually enjoy admin, which is not for everyone. I am also being trained as a backup for the wages manager.” However, she likes her job as it is more involved in the actual farming process.

Being a woman, Jacobs says, is not always easy especially since she is soft-spoken. Part of Jacobs’s job is to reconcile the harvest records with the bins received at the packhouse. “If there are discrepancies, I have to ask difficult questions of those who are in charge in the orchards, most of who are men. It’s hard to question people, especially men.”

Yet, she has risen to the challenge. “I’ve learned to have a thick skin and stand up for myself. I won’t allow anyone – especially not a man – to walk over me.”  Like many of the other workers, Jacobs grew up on one of the De Keur farms. She is now raising her daughter on the farm as well.

Suzette de Bruin is a health worker in one of De Keur’s farm clinics. Like many emplo­yees, she started as a general worker and moved to her current role in 2008. Initially, she was an interpreter who would translate medical advice into isiXhosa for other workers.

In 2010, De Keur sent De Bruin on a course in health work and another in first aid. Her job entails house visits to follow up with patients, making sure they are taking their medication. She also gives HIV and family planning talks to farmworkers.

When needed, she calls the ambulance or make sure a patient goes to the clinic in town if they need more help than De Bruin can offer on the farm. “This was by no means my dream. But it’s how life worked out and I enjoy the work I do,” she says.

De Bruin was raised by her grandparents and says this is the reason working with elderly people is her favourite part of the job.