He took the first prize of R15,000 with Howie, a 420kg behemoth, on Saturday at the Pretoria Farmers Market.

But his proudest moment was when daughter Megan, 12, won second place overall, with her pumpkin, Tupin, weighing 200kg. So big was her squash that they removed it from the children’s competition and placed her with the adults.

Megan had been watching her father’s method of growing and wanted to try it herself. And she said she did it on her own without help from dad.

Tupin came from the seed of SA’s biggest pumpkin record holder Bekkie, which was grown by her father. At 613kg Bekkie won last year’s Livingseeds Giant Pumpkin Competition at the Walkerville Agricultural Show and took the SA record.

Megan said her friends would be very excited when they heard the news of her win.

Festival organiser Henri Combrink said he was disappointed in the number of entries this year but said the November rains had made it extremely hard for growers and many crops had died.

The union owns the rights to the entrants’ seeds and sells the winning seeds for R250 for two.

The union donates all entered pumpkins to welfare organisations to feed the needy.

Joubert is now pinning his hopes on next week’s Walkerville Agricultural Show where he will enter Wallie, which he believes may be 450kg.

But this year there would be no record-breakers for him because of heavy rains. He said many farmers had lost their produce from root rot as a result. “I am so proud of my daughter, she did so well,” he gushed. The world record for a pumpkin is 1,190kg, held by German Mathias Willemijns, It was recorded at the Great Pumpkin Commonwealth in Ludwigsburg, Germany, on October 9 2016. 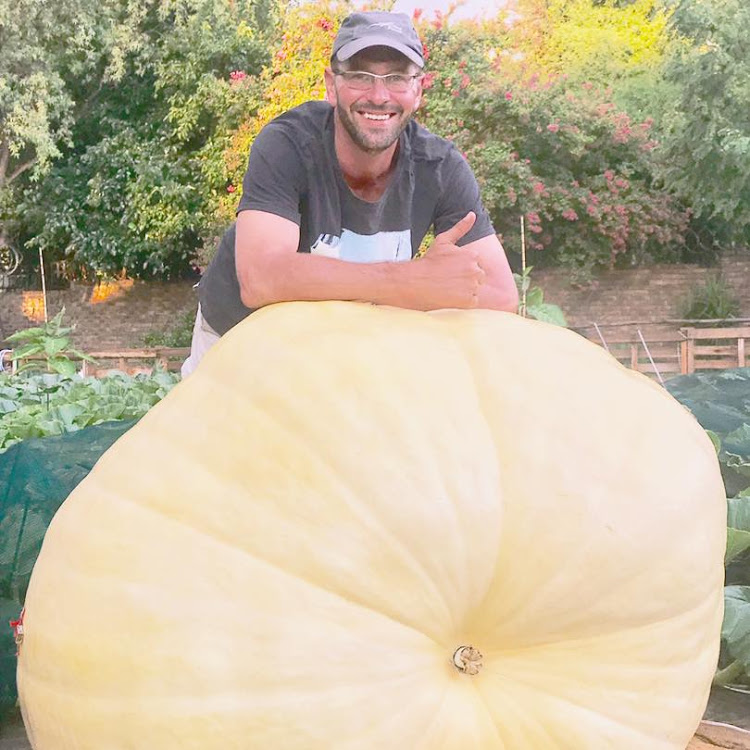 New grower Peet Joubert is the winner of the 2019 Livingseeds Giant Pumpkin Competition with his 613kg whopper. Image: Peet Joubert via Facebook

At least two hours a day tending to his treasure, with the heatwave during December requiring more than five hours’ attention a day being poured into his behemoth, landed this SA man an epic reward at the weekend.

Peet Joubert, who fielded a pumpkin weighing in at 613kg, smashed the SA giant pumpkin record at the Livingseeds Giant Pumpkin Competition, held at the Walkerville Agricultural Show.

Sean Freeman of livingseeds.co.za said: “Peet’s giant was an outright winner with his closest competitor on the day displaying a pumpkin of 357.5kg.”

On his own Facebook page, Joubert has been sharing his experience of growing the pumpkin from seed to the monster size the plant became. In one video, the new national pumpkin grower champion expresses his excitement at the first buds and the “spellbinding” flowers that emerged as well as the practical details of plant spacing and irrigation that was required to ensure the dramatic growth of his pumpkin.

Freeman commented: “Peet is new to growing, and says that this was one of the most stressful things that he has accomplished.”

These pumpkins grow at such a rapid rate that one can see them gaining between 25kg and 30kg in a single day, said Freeman, adding it has an average growing period of between 70 and 80 days.

An immense amount of attention is required to ensure that nothing goes wrong with a competition-quality pumpkin.

Even loading a giant pumpkin from a grower’s back garden is a mission that cannot be underestimated, said Freeman.

Joubert’s trailer that was used to carry the behemoth became bogged down in the soft soil with the sheer weight of it. As a result, said Freeman, he had to lift a three-ton trailer “that also had the added weight of the SA record-breaking pumpkin on it, and it had to be done in a way that did not put the ‘life’ of his pumpkin in jeopardy. Any structural damage to the specimen caused by a wrong move, or the trailer slipping off a jack, would have disqualified his entry, even before it had arrived at the weigh-in”.

A modest Joubert, whose profile shares the famous quote “By growing a plant is to believe in tomorrow” attributed to actress Audrey Hepburn, simply states: “Passion = Hard Work = Results.”