Nutrition insecurity in the developing world has been linked to the high cost of protein foods and the low nutritional quality of some of the traditional foods that provide daily meals for millions in Africa. Fortified foods are not readily available for most families due to the high poverty level.

One of the crops that fit the bill for adequate nutrient and mineral composition and can help eradicate food and nutritional insecurity if adopted into the major food systems is the Bambara groundnut (BGN).

There is a significant variation in nutrient and antinutrient factors among Bambara groundnut accessions. A study was carried out by scientists from IITA and North-West University, South Africa, to show the degree of variability of nutrient and antinutrient components such as percentage ash, moisture, protein, fat, tryptophan, tannin, and phytate content in seeds of 95 accessions.

Due to its high protein and fiber content and a good balance of essential amino acids, the Bambara groundnut is considered a complete food, an excellent alternative to meat, and an ideal component for animal feed.

The study showed that the two traits—carbohydrates and tryptophan—are high in more than half of the accessions, while the others have high amounts of the remaining traits, including the antinutrient factors.

According to the study, tryptophan is a precursor of auxin—an essential growth hormone in plants—and bioactive compounds such as nicotinamide, melatonin, and kynurenine in humans.

The level of tryptophan recorded in the study shows that Bambara groundnut can help get the quantity of tryptophan recommended by the World Health Organization (WHO), which is 1.70, 0.85, and 0.66 for infants, children, and adolescents, respectively.

This study confirmed the high diversity in the components of nutrients and antinutrients previously reported in BGN.

Results from the study will aid in identifying parent lines for improved breeding programs and offer opportunities for selecting and breeding the crop for beneficial nutrient compositions.

While legumes have become immensely important as alternative sources to nutrient fortified foods, BGN can successfully improve food and nutritional security even more than some major crops in Africa.

The Bambara groundnut (Vigna subterranea) is a grain legume grown mainly by subsistence farmers in sub-Saharan Africa. It is the third most important legume in semi-arid Africa behind peanut (Arachis hypogaea) and cowpea (Vigna unguiculata).

Bambara groundnut is also called earth pea, jugo bean or nyimo beans. It is related to cowpeas and is used for both human and animal consumption. Wild, as well as cultivated varieties, occur producing groundnuts of different colours and sizes ranging from small purple seeds to large cream-coloured seeds with black eyes.

White and cream varieties with large seed size are preferred in Africa whilst black and red varieties are preferred in South East Asia. Bambara groundnut is grown primarily for its seeds, which are used as a food, in traditional ceremonies (such as funerals) and gift exchanges. Mature, dry seeds are boiled and eaten as a pulse, ground into flour and as an animal feed.

There has been renewed interest in recent years for cultivation in arid savannah zones as it is resistant to drought and can produce a reasonable crop even on poor soils, such as the Bambara region, near Timbuktu south of the Sahara.

Nigeria is the biggest producer of groundnuts in the world. Bambara groundnut is cultivated in the South African provinces of Mpumalanga, Limpopo and KwaZulu-Natal. 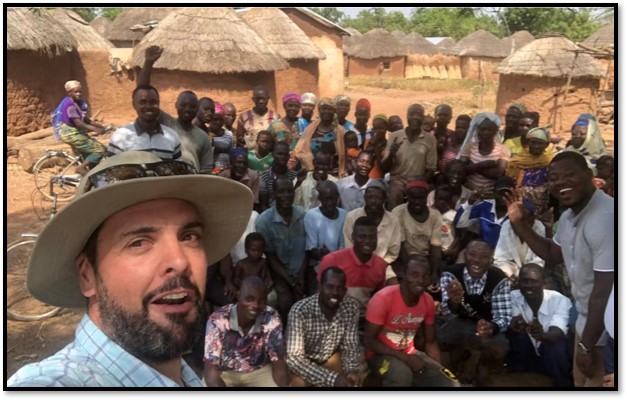 In South Africa, the fast-growing Bambara groundnut is intercropped with maize, cowpeas and melons or planted as a sole crop. It takes between three and six months to mature, depending on climate.

Bambara groundnut is propagated by seed at sowing rates ranging from 25 – 160 kg per hectare, either in rows or broadcast. It can be grown in poor sandy soil, and is easier to harvest in well-drained soils. The optimum temperature for germination of Bambara groundnut is 30 – 35°C.

Full sun and average day temperatures of around 27℃ are preferred. Sandy loamy soils rich in phosphorus (P) and potassium (K) are best, although some studies have found that enriching with these minerals do not necessarily increase the yield.

Bambara groundnut can improve soil quality as it is able to fix atmospheric nitrogen in the soil through a bacteria of the Bradyrhizobium group.

The plant grows about 30 cm high and looks like a bunch of leaves (of three leaflets each) growing from a group of stems to form a crown on the surface. The groundnut pods, containing one or two seeds (nuts), develop underground.

Seeds are mature 3 – 6 months after germination. At harvest time the plant is hand-pulled from the ground, exposing the nuts which grow underground. The nuts are then removed by hand and either used fresh or dried. Harvesting small plots is often done over a period of time. An average yield of 300 – 600 kg per hectare can be expected. 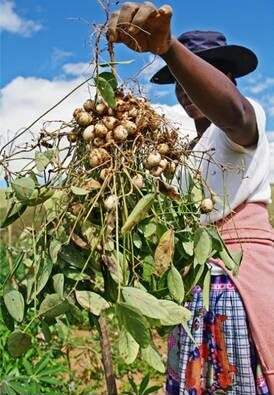 How to Eat Bambara Groundnut

The Bambara groundnut is an important source of dietary protein about 18 – 19% as well as 63% carbohydrate and 6.5% fat. Although it has a lower protein content than peanuts, Bambara groundnut seeds are richer than peanuts in essential amino acids such as isoleucine, leucine, lysine, methionine, phenylalanine, threonine and valine.

The nuts may be eaten fresh as snacks by boiling or roasting, but can also be dried. The majority of the nuts are consumed after they are dried. The dried nuts, which are about 1.5 cm long, have very hard seed coats.

The seeds are then ground and sieved to produce a very fine flour, which is used to make bread, cakes or dumplings. The flour is mixed with oil and warm water, chopped onion, salt and chilli powder and then steamed. Nut milk and fermented products similar to tempeh (a fermented soy product) can be made from the seeds.