Amaranth: Vegetable that can change your fortunes

Amaranth: Vegetable that can change your fortunes 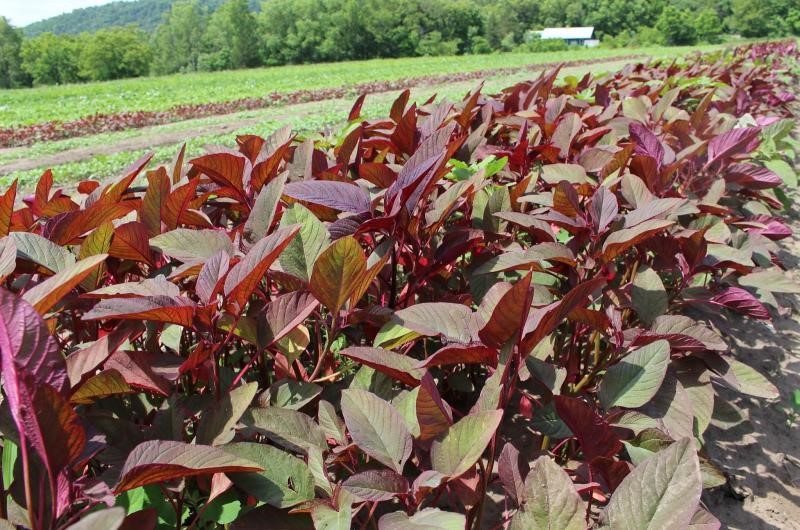 Amaranth is a healthy traditional vegetable.

‘Let the rains come, amaranth will come up.’ This saying was common among the Agikuyu, especially during drought and famine.

The locals knew amaranth was the first to grow when it rained. It was also the first vegetable to be harvested and instantly brought an end to hunger. Even today, amaranth grows anywhere, and it sometimes doesn’t require special attention.

But many years ago when Christopher Kimunya, a Kenyan farmer, was growing up in Lari, Kiambu County, amaranth was food for the poor.

“Amaranth was the vegetable of the poor. We used to look forward to it during a famine and when it finally grew in plenty, we fed it to the cows and threw the rest away,” recalls Kimunya.

But the narrative is changing. More and more farmers are commercialising the vegetable, known for its hardiness to withstand harsh climatic conditions, pests and diseases and also its high nutritional content.

Vegetable of the poor

Kimunya ventured into serious vegetable farming in 2011 after he attended a village Barraza in Lari organised by an NGO that links smallholder farmers to markets.

The organisation interested farmers in Lari with contract farming that they said would help them with marketing vegetables. The farmers organised themselves into a group they called Kabunge Commercial Village that grows and supplies amaranth to the firm’s trading subsidiary.

It was the first time that Mr Kimunya learnt of the importance of amaranth.

Today, he grows African nightshade, spider plant and amaranth on his quarter-acre in Lari.

For every bunch of vegetable amaranth that the organisation picks from his farm, Kimunya pockets Sh12. The least he supplies in a month is 1, 000 bunches.

And now, Kimunya agrees that amaranth is not a crop for the poor. There are about 60 species of amaranth or mchicha, as it is referred to in Kenya. Other people call it Terere. Additionally, there are close to 6,000 different varieties of amaranth distributed in many parts of the world. In Kenya, however, there are only five varieties of this vegetable that comes in shades of green, red, and purple.

Amaranth is a favourite among other vegetables for its high protein content. It has balanced amino acid content, calcium, potassium, iron, vitamin A and C. It is also gluten-free and therefore suitable for people who are gluten intolerant.

Experts also root for it. Prof Mary Abukutsa, Deputy Vice chancellor, Research and Extension Services at Jomo Kenyatta University of Agriculture and Technology (JKUAT) says most households buy amaranth because it can be cooked with any other vegetables.

“It has a tendency to soften tough vegetables and add flavour to them. It also cooks fast when prepared on its own,” says Prof Abukutsa who has been researching on African Indigenous Vegetables (AIVs) for the past 20 years.

All the good qualities and many nutritional benefits notwithstanding, consumption of amaranth and other AIVs is still low especially in Kenya which does not measure up well compared to other countries.

Nigeria is the leading country in Africa with an average consumption of 60 kilograms per person annually.

Prof Abukutsa says amaranth has a lot of potentials that is yet to be harnessed by key players in the indigenous vegetable value chain. “Farmers don’t have the technical information in amaranth propagation starting from the choice of varieties, quality seeds and value added options,” says Prof Abukutsa.

The farmers, she says also prefer producing their own seeds instead of going for high-quality seed approved by researchers.

According to Abukutsa, at least 50 per cent of indigenous vegetables are lost due to poor post-harvest management and lack of technologies to add value on the vegetables.

Deputy Director of agriculture in charge of Agri-nutrition in the ministry of Agriculture, Jane Wambugu says the government’s strategy to improve food and nutrition under the 100 per cent Food and Nutrition Security agenda will harness underutilised vegetables.

Ms Wambugu was speaking at a one-day stakeholders’ workshop at JKUAT that was convened by the World Vegetable Center (WorldVeg) under the Amazing Amaranth Project.

The project seeks to enhance the production and consumption of many varieties of amaranth.

“Africa has lots of different species of highly nutritious indigenous vegetables which come in so many varieties. But all these valuable vegetables will be lost in the coming 10 years if they are not collected,” says Dr Schafleitner.

The project foresees that by 2022, about 135,000 farm households in Kenya and Tanzania will have adopted improved amaranth cultivars.

Additionally, some 530 hectares of agricultural land will be under improved amaranth varieties. 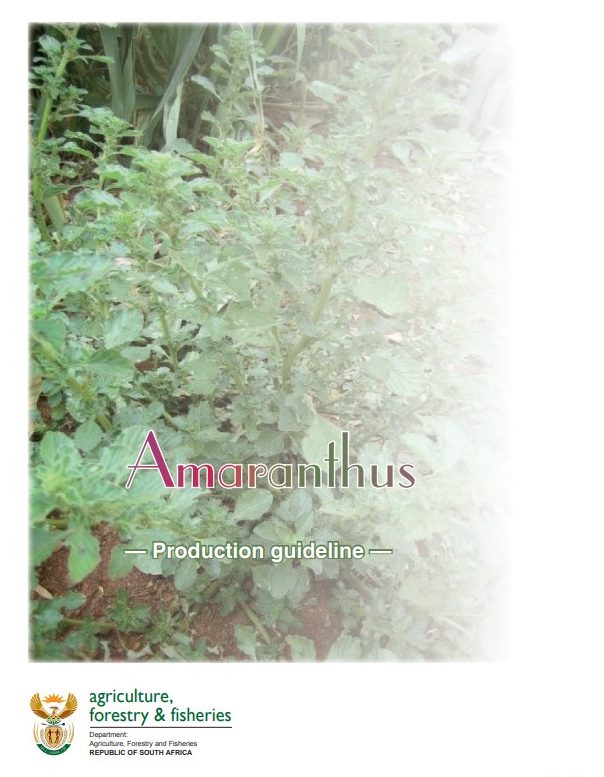 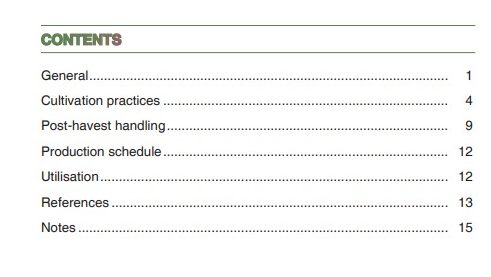 Amaranth originated in America and is one of the oldest food crops in the world, with evidence of its cultivation reaching back as far as 6700 BC. The genus Amaranth consists of nearly 60 species, several of which are cultivated as leaf vegetables, grains or ornamental plants, while others are weeds. Grain amaranth species have been important in different parts of the world and at various times during the past few thousand years.

Amaranth – an Aid to Eating and Staying Healthy during COVID-19 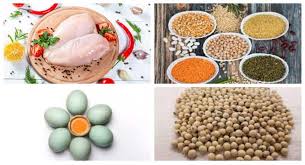 Amaranthus has a high concentration of antioxidants and phytosterols so it has been associated with several health benefits, including reducing inflammation, lowering cholesterol levels1 and increasing weight loss. The leaves are low in saturated fats and have micronutrients such as vitamin A, vitamin B6, folate, niacin, riboflavin, vitamin C, calcium, iron (29% of RDI), magnesium, phosphorus, potassium, zinc, copper and manganese. 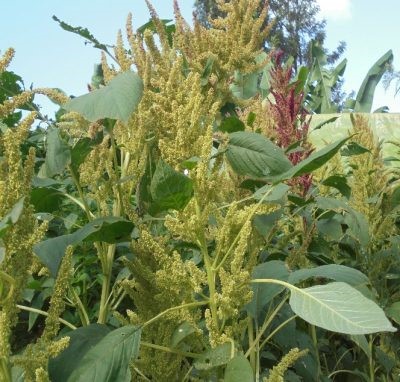 Clear the land of all bushes, burn the bushes as ashes favor amaranths production.
Break down the soil to a fine tilth to provide a layer of fine soil surface. It requires fine, loose soils which can provide the small seed with good soil contact 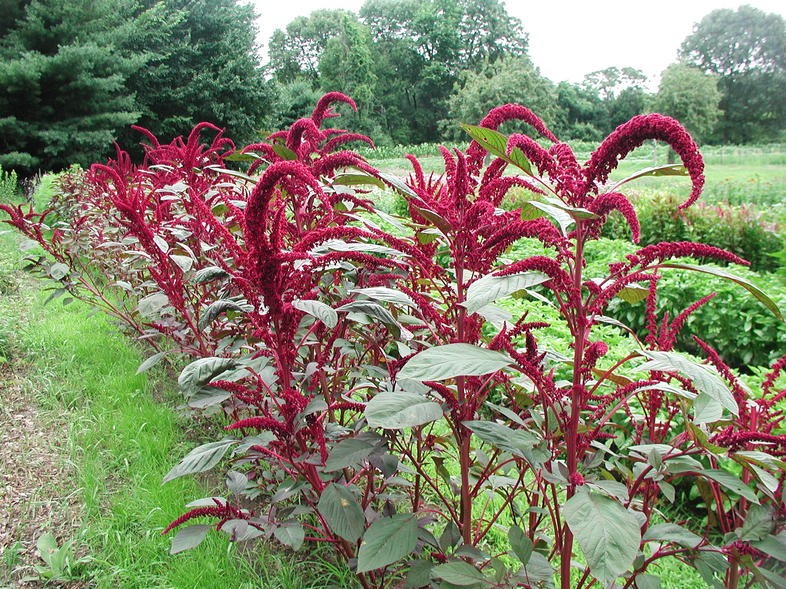 Amaranth, (the Amaranthus species) also known as pigweed, cockscomb and hell’s curse in English, is both a common weed as well as an ancient crop. Technically not a cereal grain, but used like one. Amaranth is used for its fresh leaves, protein-rich seeds and seeds ground into a gluten-free flour.