A Bevy of Black Swans and what it means for Business

Part 1: A Bevy of Black Swans  and What it Means for Business

Let’s start with the term a bevy of black swans, “A black swan is an unpredictable event that is beyond what is normally expected of a situation and has potentially severe consequences. Black swan events are characterized by their extreme rarity, their severe impact, and the practice of explaining widespread failure to predict them as a simple folly in hindsight”.

Although it has probably been said often through the ages of humanity, we do indeed live in challenging times. The third decade of the 21st Century does bring with it both extraordinary challenges, and we suspect for some quite significant opportunities. In engagements with clients, partners and associates over the past few years, and the more recent past few months, we have increasingly become aware of the enormity of the demands being placed specifically on leadership.

In this short article, we will share our own perspectives with you. The article is not meant to be an academic or intellectual approach, but one where we share our own lived experience and thoughts. We will, where relevant, reference some “science”, but only to clarify our pattern of thinking. Our invitation to you is to engage us in conversation, not so much to find “the answers”, but to at least explore whether we are asking the right questions.

One of the key issues of our current world is that these black swans are not “extremely rare” anymore, and they now seem to be a bevy of black swans. Some examples will illustrate.

Namibia lost a significant portion of their revenue which was the export of fishmeal to China;

In South Africa we are not only challenged by these global “black swans”, but we have our own to contend with. We have massive economic challenges, significant political and social upheaval, massive unemployment, droughts in some areas of the country, and perhaps of significant importance, an apparent lack of credibility in the international investment community.

In simple terms, and if one were to use the typical PESTEL2 framework it is clear that there are black swans present in almost every domain of our landscape.

A Bevy of Black Swans: From Complexity to Disorder

Much of our thinking about complexity is informed by Levels of Work Theory3,4, and we have over time seen how important it has become for enterprises to understand from a systemic perspective the interplay and interdependence between different levels of work. We have also witnessed the positive (and negative) consequences when individuals are able (or not) to generate the requisite complexity to deal with the challenges facing and opportunities presented to their enterprises.

In this context, we could not help but be reminded of the Cynefin5 framework. In Figure 1 – Cynefin Revisited below, we show that, in our view, the central piece called disorder has increased in size quite dramatically. While we could reasonable argue that, over time, the Complex and Chaotic elements of the original framework has increased in relative size, we do believe that the bevy of black swans have over a very short period of time led to a situation where, for the most part, we are faced with constant “disorder”. To quote a colleague of ours, “disorder has become the order of the day”.

A complex system is characterized by three features: it is non-linear (small inputs lead to large and unpredictable results), it is open (influenced by things from outside of “itself”), and it is chaos-capable (meaning it can function in erratic, unpredictable ways at times). Complexity theory reveals that all complex systems have emergent properties, processes that arise from the flow of the system’s elements across time.

Mathematics, a form of science revealing aspects of reality, suggests that one of those emergent properties is self-organization. This is where a process arises from the elements of the system and then turns back and regulates that from which it arose.

Leading and Managing Systemic Interdependencies with A Bevy of Black Swans

An additional dimension to the challenge of leading and managing in a period of disorder, whether originating from the external world or self-inflicted, is to develop a sufficient level of understanding of system dynamics in organisations.

The two fundamentals to recognise are:

The Systemic Relationships (interdependencies) of an Enterprise

The diagram (see Figure 2 – System Interdependencies) depicts the organisational as a network of interdependencies. and in this particular case expressed as a series of triangular relationships. Business strategy forms the pivot in the centre with six triangular constructs and two rectangular relationships excluding the bilateral relationships. The pragmatic implication is that no business decision can be considered in isolation without understanding the upstream and or downstream implications, A decision on technology solutions, for example, will have consequences for business processes, people and structures. Similarly, a decision on market segmentation will have implications for product range and geographies. 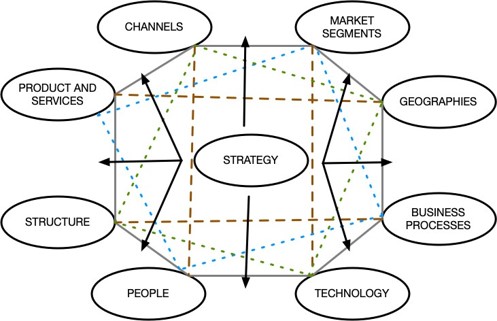 The additional dimension to the systemic interdependencies highlighted above is the additional reality that organisational behaviours will inevitably play themselves out over three-time horizons. These are referred to as short-, medium- and long-term respectively. A further complication is that these three-time horizons are not mutually independent or exclusive, but that shorter-term actions will undoubtedly also have consequences, planned or unplanned, for longer time horizons. This increases the importance of understanding the crossing points between the three horizons as indicated. Pragmatically, it also means we have to be and remain very conscious of what is really happening, and how it may impact on our thinking and actions over different time horizons7. 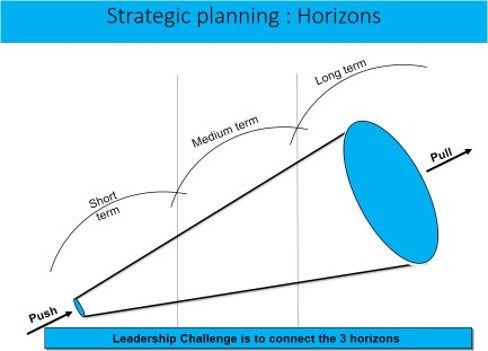 Keeping in mind the context created by the bevy of black swans, and assuming you agree with our view on the increased disorder, some key questions from a leadership perspective might be:

In our experience, organisations are increasingly reflecting on dimensions that may be summarised as in Figure 4 – Leadership Dimensions below. 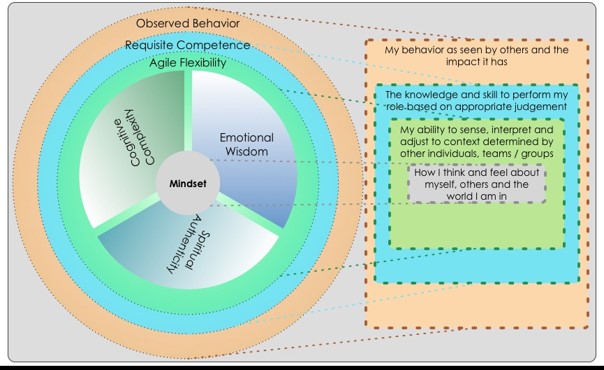 What is suggested is that the Leadership that can address the dimensions posed above have mastered the following:

From a leadership perspective, it implies a mandatory and rigorous thought process wherein the components of organisational dynamics have to be assessed strategically as part of the ecosystem to prevent unintentional blind spots. The response to black swan events even more so demands a systemic approach to thinking and planning to mitigate the risk of incomplete or even shallow thinking.

We are mindful that these simple points, in fact, assume a wide range of demands being placed on leadership (and the leader). In our work with clients, we have begun to use a specific language to clarify the thinking contained in these points. We use the term “leadership capability” to include four aspects, these being:

Conclusion on A Bevy of Black Swans

In this short article, we have attempted to show the following:

As suggested in our introductory comments, we do not claim to have the answers to the challenges facing leaders. What we do hope to have added to you, the reader, are some frameworks to guide your own thinking, so that you can frame the mindful questions before coming to conclusions and taking action. Finally though, an action you will simply have to take.

4 Jaques, E., (1971). Time-span handbook: The use of time-span of discretion to measure the level of work in employment roles and to arrange an equitable payment structure. London: Heinemann.

7 Markgraaf, B. (2019) Short-Term, Medium-Term and Long-Term Planning in Business. 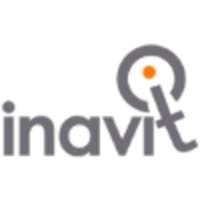